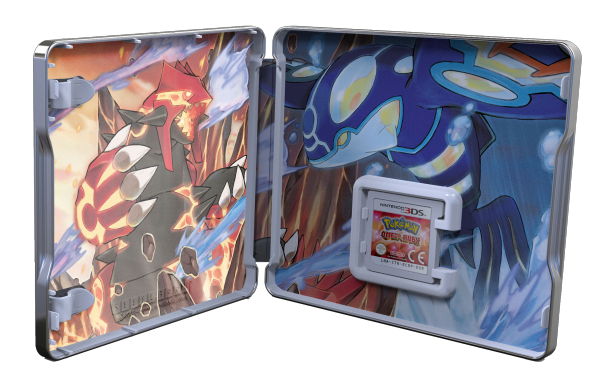 For those who pre-order Pokemon Omega Ruby and Alpha Sapphire in the United Kingdom, they will get their game in a limited edition steelbook case.

Primal Groudon will feature on the front of Omega Ruby, while Primal Kyogre graces the cover of Alpha Sapphire.

On the inside, there is artwork of the two legendary Pokemon facing off, and of course, the video game cartridge.

Nintendo will also give a Legendary Figurine keyring of either Primal Groudon or Primal Kyogre depending on which version of the game is pre-ordered.

Pokemon Omega Ruby and Alpha Sapphire for the Nintendo 3DS and 2DS is set for a November 21 release in North America, Japan, and Australia, and will launch in Europe a week later.

In other news, The Pokemon Company finally revealed their “shocking” news from last week.

Nintendo and Bandai Namco will be working on Pokken Tournament, a Tekken-style arcade game that is slated for a 2015 launch.

According to Bandai Namco Director Katsuhiro Harada, “Tekken characters will not be making an appearance.”

“As we’re making a Pokemon fighting action battle game, I’ve already touched on this while on the livestream, but in this game there will not be a high/mid/low guard system mechanic. Instead, we’re planning to include a new type of [mechanic].”

Check out the Pokken Tournament trailer below.