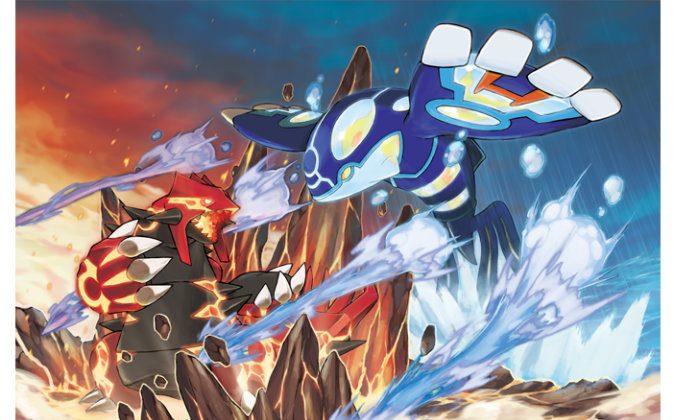 The Pokemon Company announced on its website that Rayquaza will join Groudon and Kyogre as the three legendary Pokemon in its upcoming remake of Pokemon Ruby and Pokemon Sapphire.

News that Rayquaza made the game will come as no surprise to fans of Pokemon Ruby and Pokemon Sapphire, as Rayquaza will play an important role in the “Weather” legendary Pokemon trio.

Groudon and Kyogre will definitely have the ability to go through a form of “Primal Reversion,” where they will special abilities and even an additional type.

Primal Groudon will become a Fire/Ground Pokemon instead of just Ground, and get the Desolate Land and Precipice Blades abilities.

Primal Kyogre is still a Water type Pokemon, and will get the abilities Primordial Sea and Origin Pulse. Kyogre’s Sp. Atk will also increase in Primal mode.

For regular Pokemon, Camerupt, Sharpedo, and Gallade will be able to Mega Evolve.

Mega Camerupt will gain the ability Sheer Force, which raises its power, but causes its moves to lose any additional effects they might have. The Pokemon’s speed will also fall, so trainers must expect Mega Camerupt to go second in battles.

Mega Sharpedo will get the ability Strong Jaw, which boosts its biting attacks. While in Mega form, Sharpedo’s high base Attack will rise even further.

Finally, Mega Gallade gains the ability Inner Focus, which prevents it from flinching. Its Speed and Attack stats also go up, so it should be able to hit first in battle.

Pokemon Omega Ruby and Alpha Sapphire will launch for the Nintendo 3DS and 2DS on November 21 in North America, Japan, and Australia, and will be released in Europe on November 28.