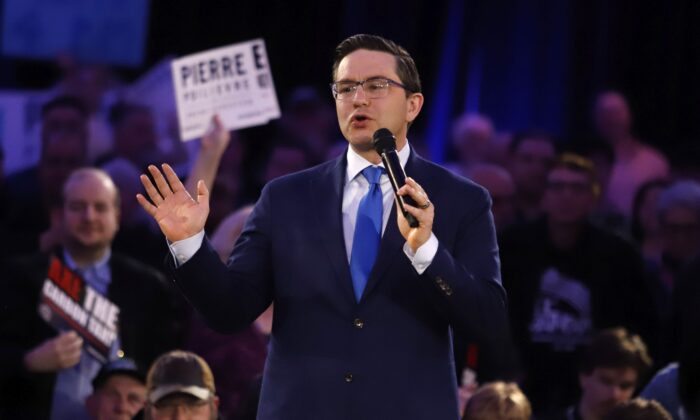 Conservative MP and party leadership candidate Pierre Poilievre is criticizing a media outlet that published an article that accuses him and some of his colleagues of sympathizing with the “far-right,” saying “No wonder trust in the media is at an all-time low.”

“One of Global News’ so-called journalists decided to smear me & thousands of other Canadians because we criticized the federal government’s unscientific & discriminatory vaccine mandates,” Poilievre tweeted on July 7.

Poilievre was commenting on Global News’ July 7 article “How close is too close to the far-right? Why some experts are worried about Canada’s MPs.”

The article criticizes Poilievre’s and other Conservative MPs’ support for veteran James Topp, who walked across Canada to protest vaccine mandates, as well as for the Freedom Convoy.

The experts quoted in the article are an academic and the director of the taxpayer-funded Canadian Anti-Hate Network, both of whom have been steadily critical of freedom-themed protests.

The thesis of the article is that because some of the supporters of Topp and the Freedom Convoy have “far-right views,” MPs who support Topp and the freedom movement could be “legitimizing extreme ideas.”

“Instead of just covering the news, unprofessional journalists like you try to set disingenuous traps to attack your opponents,” Poilievre said in a statement responding to the piece.

The July 7 statement says Poilievre will continue to support those who want to restore freedoms, while at the same time condemning those who “engage in illegal behaviour or express heinous views.”

The statement adds that Poilievre can’t be held accountable for the “words and deeds” of everyone he meets as well as those he hasn’t even met.

There was a flurry of reactions on social media to Poilievre’s response, which Aaron Wudrick of the MacDonald-Laurier Institute characterized in a tweet as a “perfect political Rorschach test.”

“This story & response to it are such a perfect political Rorschach test. To those who dislike [Poilievre], these are important questions and he’s thin-skinned/cagey! To those who like [Poilievre] it’s a perfect example of an over-the-top, biased story and a justifiably unapologetic response!”

Rorschach test refers to a psychological test where people under examination are provided with abstract images and asked to provide their interpretation of the images.

Some journalists said Poilievre should have simply answered the questions in a straightforward way, while others pointed out that the journalist appeared to hold a pre-existing bias.

“‘Let me repeatedly ask a candidate if he is a white supremacist on a recurring basis every two weeks and then when he says no we’ll write an article explaining how actually he still is. This is definitely journalism,’” said Anthony Koch, a spokesperson for Poilievre, in a tweet on July 7.

Poilievre is the presumed front-runner in the Tory leadership race. His campaign claimed in June having signed over 300,000 new party members. Disqualified candidate Patrick Brown had claimed to have signed 150,000.

New members who reportedly signed with Poilievre count for a little under half of the total Conservative Party membership of 675,000.