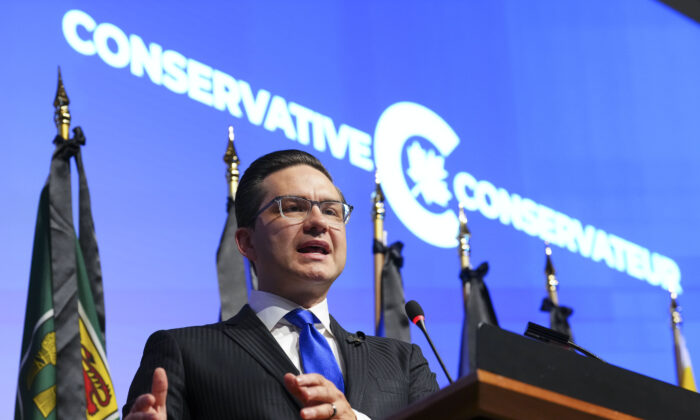 Conservative leader Pierre Poilievre addresses the Conservative caucus for the first time as leader during a meeting in Ottawa on Sept. 12, 2022. (Sean Kilpatrick/The Canadian Press)
Canada

“I’m issuing a challenge to Justin Trudeau today: if you really understand the suffering of Canadians, Mr. Prime Minister, if you understand that people can’t gas their cars, feed their families, or afford homes for themselves, if you really care, commit today that there will be no new tax increases on workers and on seniors—none,” said Poilievre in Ottawa.

The new Tory leader remarked that employee contributions to the Canada Pension Plan (CPP) and Employment Insurance are set to go up in the new year, along with the Carbon Tax.

The CPP contribution rate has been increasing incrementally since 2019 to reach a 1 percent increase in 2023. The Carbon Tax will increase by $15 per tonne in the new year.

Poilievre said he’s open to collaborating with other parties to “extend and advance the interests of Canadians,” but that he would not compromise on the issue of new tax increases.

Poilievre referred to the NDP’s deal with the Liberals to support them on matters of confidence in exchange for certain universal programs as “a radical woke coalition,” and said he would “fight tooth and nail to stop the coalition” from introducing any new taxes.

The longtime MP was declared leader on Sept. 10 after earning 68 percent of the points on the first ballot. Former Quebec premier Jean Charest was the runner-up with 16 percent support.

Poilievre, who has represented the Ottawa riding of Carleton in the House of Commons since 2004, ran a campaign focused on cost-of-living issues and reducing government spending and size. He said the principle is not simply about balancing the books, but about real-world impacts.

“We’re not interested in having a more impressive accounting ledger for its own sake. We’re doing this as Conservatives because we know that when government ruins the finances of the nation, it ruins the lives of its citizens,” Poilievre said.

The Tory leader mentioned a few anecdotes he used many times on the campaign trail, such as that of a man not having enough money to pay for fuel to visit his dying parents, or that of young adults who can’t afford a home and still live in their parents’ basement.

“Canadians are hurting and it is our job to transform that hurt into hope,” he said, introducing what appears to be a new slogan he repeated during his address.

Poilievre needs to establish his shadow cabinet in short order with the House of Commons resuming on Sept. 20 after the summer recess. He received the endorsement of 62 out of 118 MPs in his leadership bid, many of whom had shadow roles.