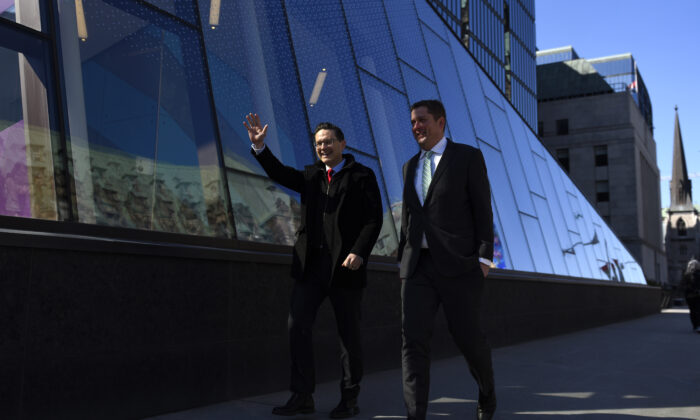 Conservative MP and then-leadership candidate Pierre Poilievre walks with his caucus colleague Andrew Scheer, a former leader of the party, as they arrive for a press conference outside the Bank of Canada in Ottawa, on April 28, 2022. (The Canadian Press/Justin Tang)
Canada

“My inflation-busting Leadership Team,” wrote Poilievre on Twitter over a picture of his team with their role descriptions.

Lantsman served as transport critic and chair of outreach under the previous leadership, where she routinely criticized the government on COVID-19 travel restrictions such as the vaccine mandate.

The MP for the riding of Thornhill in Ontario was one of the first among her colleagues to endorse Poilievre’s leadership bid, having done so two days after he announced he was running on Feb. 5.

Uppal, who represents the Alberta riding of Edmonton Mill Woods, served on Poilievre’s campaign as national co-chair. Before taking on this role he was chair of outreach under interim leader Candice Bergen.

Scheer, who served as party leader before Erin O’Toole, endorsed Poilievre in early March and helped him connect with Saskatchewan voters by holding an event with him in Regina on March 4.

The MP for Regina-Qu’Appelle was the critic for infrastructure and communities under the previous leadership.

Kerry-Lynne Findlay, the MP for South Surrey-White Rock in B.C., moves from defence critic to opposition whip under Poilievre.

Berthold, who represents the riding of Mégantic-L’Érable, was deputy leader to Bergen. He’s the only member of Poilievre’s leadership team that did not officially endorse him.

Poilievre hasn’t said whether he will offer a role to fellow contender Leslyn Lewis, who was not given a position by O’Toole nor interim leader Candice Bergen.

Quebec MP Alain Reyes, who endorsed Jean Charest’s leadership bid and was Quebec lieutenant and critic for official languages under O’Toole, announced on Sept. 13 that he was leaving the party to sit as an Independent.