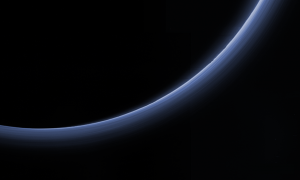 NASA’s New Horizons spacecraft recently returned data suggesting Pluto contains substantially more water ice than previously believed. Such ice is said to form Pluto’s crust or “bedrock” and is considered more stable than the ices above it–which shift and change with the seasons.

A false-color image released by NASA shows two different attempts to map out the dispersal of Pluto’s water ice. The left-hand map uses a less sensitive method only able to locate large concentrations of water ice, while the map on the right-hand side uses modeling to parse water ice from other forms.

According to the space agency, “The new map shows exposed water ice to be considerably more widespread across Pluto’s surface than was previously known — an important discovery. But despite its much greater sensitivity, the map still shows little or no water ice in the informally named places called Sputnik Planum (the left or western region of Pluto’s ‘heart’) and Lowell Regio (far north on the encounter hemisphere). This indicates that at least in these regions, Pluto’s icy bedrock is well hidden beneath a thick blanket of other ices such as methane, nitrogen and carbon monoxide.”