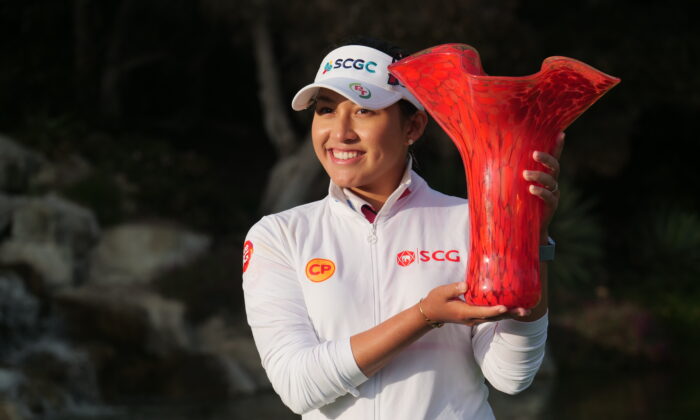 Atthaya Thitikul of Thailand holds the winner's trophy after her playoff victory over Nana Koerstz Madsen of Denmark during the final round of the JTBC Classic at Aviara Golf Club, in Carlsbad, Calif., on March 27, 2022. (Nhat Hoang/The Epoch Times)
Golf

Playoff Victory for LPGA Rookie With 8-under Round at Aviara

CARLSBAD, Calif.—Atthaya Thitikul, a 19-year-old rookie, won her first LPGA Tour title, shooting the tournament low score in the final round Sunday to eventually win in a play-off over Nanna Koerstz Madsen in the 2022 JTBC Classic at Park Hyatt Aviara Resort & Spa in north San Diego.

With a field full of the world’s top players, Thitikul began the day six strokes behind Nanna Koerstz Madsen at 8–under, scoring nine birdies and a bogey to tie for the lead at 16-under and advance into a two-person playoff.

Thitikul stated that she didn’t concentrate on winning the tournament, being so far behind, “I just wanted to focus on my game, try my best to give myself chances to make birdies.”

Thitikul is the youngest golfer ever to win a professional golf tournament, having won as a 14-year-old amateur the Ladies European Thailand Championship on July 9, 2017. She was also ranked the world’s #1 women’s amateur golfer twice for 12 weeks, the first time in late June 2019.

Speaking of her win, Thitikul said “it mean[s] the world to me to have my managers here as well, and my caddie, my best friend’s here,” adding that it’s meaningful to her parents, coaches, and Thai fans watching from home.

In the last event two weeks prior at the 2022 Honda LPGA Thailand, Koerstz Madsen pulled out a playoff win and became the first from Denmark to win on the LPGA Tour.

She also played in the 2021 Solheim Cup where the Europeans defeated the United States, and represented Denmark in the previous two Olympics, finishing 13th in 2016 in Rio de Janeiro, and 9th in 2020 in Tokyo.

Koerstz Madsen attributed her recent success to improving her mental game through a Danish soccer mental coach who taught her to stay calm following mistakes.

She led the field in putting for the week and began the final round leading at 14–under.

In the final round, Koerstz Madsen made three birdies and a three-putt bogey on the final hole to drop back to 16–under for the playoff.

Having birdied the 17th hole, she had a one-shot lead and the opportunity to close out the tournament with a two-putt on the final hole.

On the opening playoff hole at #18, both hit their drives in the fairway avoiding the water that flanked the right side of the hole.

Thitikul played first, placing her approach about seven feet past the hole after it nearly went in on the left edge.

Koerstz Madsen hit the left side of the green again, this time rolling off into the edge of the rough; she made a great recovery pitch shot placing the ball less than two feet to save par.

Thitikul was unable to make her birdie putt and returned to the #18 tee for the second playoff hole where she hit a drive to the left side of the fairway.

Koerstz Madsen’s tee shot took a hard turn left, kicking off a mound to end up 219 yards away behind another mound.

Likely not wanting to risk a potentially worse line, she and her caddie/fiance Nikki Hansen decided to not take the option to drop for a better stance as her right foot was on the cart path.

Koerstz Madsen pushed her hybrid approach shot into the pond on the right and would make a double-bogey.

Thitikul played a safe approach shot on the front-left of the green to win with a bogey.

Missing the playoff with a bogey on the par-5 17th hole was Korean rookie, Na Rin An, who shot a final round 68 to finish third at –15.

Tied for fourth is world #1 Jin Young Ko of Korea, Pajaree Anannarukarn of Thailand, and Canadian Maude-Aimee LeBlanc at 14-under. Ko went four-under on the back nine with two birdies, and an eagle on the drivable #16 par four.

England’s Charlie Hull finished seventh at –12 with a 3-under round, while Inbee Park tied with Lilia Vu for eight at 11-under.

The top American, Vu, put herself in contention with the low round on Saturday, shooting 7-under. She got to minus-12 after the front nine, but made three bogeys, along with two birdies to close out her best finish.

Vu ranked first in career wins all-time at UCLA, and in the World Amateur Golf Rankings for a total of 31 weeks in 2018 and 2019.

From nearby Fountain Valley, bordering Orange County, Vu contemplated quitting professional golf after her rookie year on tour in 2019 after making just one cut in nine tournaments.

Vu earned her LPGA Tour card for 2022 with three victories last year on the Symetra Tour and was named player of the year.

Other notables are Lydia Ko and Ryan O’Toole, who tied for 12th at 9-under.

World #2 ranked Nelly Korda has been out for several weeks with a blood clot in her arm; her sister Jessica Korda finished 3-under tied for 51st.

Lexi Thompson finished 5-under tied for 38th and Los Angles native Danielle Kang finished tied for 42nd at 4-under.

These and other top players are preparing for the first Major Tournament of the year this week 100 miles away at Mission Hills Country Club, Rancho Mirage, California for the Chevron Championship.