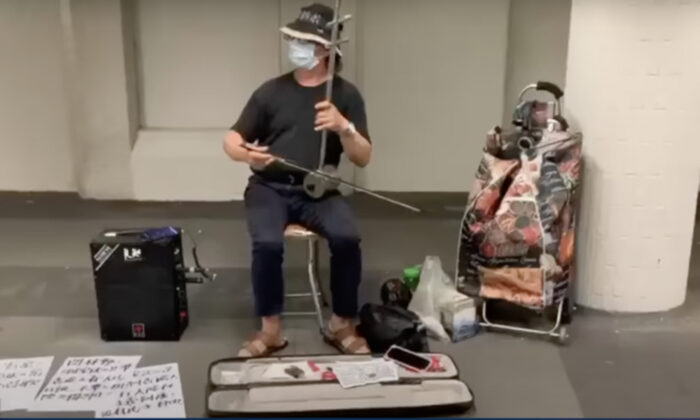 One senior Hong Kong citizen who played the familiar protest song “Glory to Hong Kong” on the street earlier was charged by police with “playing an instrument without a licence.”

The case was heard on Aug. 22 at the West Kowloon Magistrates’ Court. The old man denied the charges. The magistrate finally ruled that a “no prima facie” case and charge cannot be established. The defendant said after the court hearing that “truth is on our side.”

Li Jiexin, 68, was accused of playing “Glory to Hong Kong” with the erhu (Chinese two-stringed fiddle) at Tung Chung Bus Terminal on April 29.

In his testimony, Police Constable Ng Wai-kei said that he arrived at the scene after receiving a noise complaint that day and found that the defendant was playing with a loudspeaker which noise was clearly audible as far as 20 meters (66 ft) away. Ng then asked Li to show his ID card. Li just planned to pack up and leave instead. During that time, Li said, “charge me if you like, but I will continue to play the erhu.” Li placed several pieces of paper on the ground, but these did not include a permit to play in public issued by the Commissioner of Police.

Defendant Li Jiexin was not represented by a lawyer and defended himself in Putonghua. He asked Constable Ng what he understood by “Glory to Hong Kong,” but was stopped by Deputy Magistrate Felix Tam Lap-fung who pointed out that it had nothing to do with this case. The key point here was whether the defendant had obtained a license to play a musical instrument (in public).

In the end, Tam believed that the prosecution failed to present evidence for all the elements required for the charge. The evidence in court could only show that the defendant played the erhu at the time of the alleged crime, and there was no evidence to prove that Li did not have a licence. Therefore, he ruled that the case was “no prima facie.” The charges were dropped, and the defendant was to receive HK$500 (US$64) in legal costs.

Li said outside the court that he was satisfied with the ruling and would continue to perform on the streets in the future, believing that the charge was “a waste of time.” He declared again, “Glory to Hong Kong, Truth is on our side.”