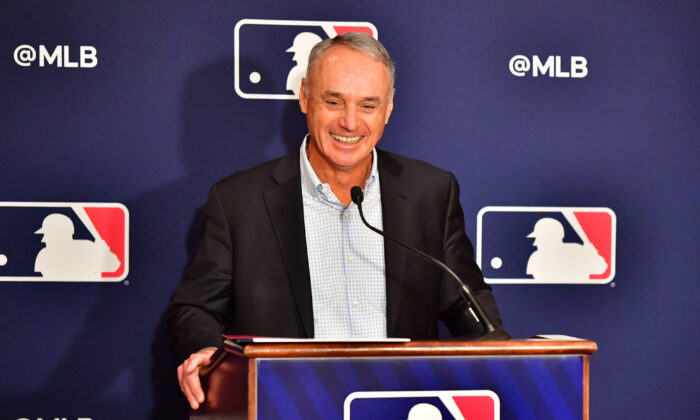 Players reported to voluntary spring training on March 11, immediately after news that negotiations were successful between the league and the players union, ending the 99-day lockout of Major League Baseball (MLB); many players had already been practicing informally with teammates, awaiting the new collective bargaining agreement (CBA).

“We’re going to play 162 games,” said MLB commissioner Rob Manfred. “I have to say I am genuinely thrilled to be able to say that Major League Baseball’s back, and we’re going play 162 games … by apologizing to our fans.”

When does Spring Training begin?

The mandatory report date is this Sunday, when camps officially open. Players can report as early as Friday.

When do Spring Training games begin?

Tentatively March 18. The revised Spring Training schedule was not yet complete, as of this writing.

When is Opening Day?

Thursday, April 7. That is one week later than the originally scheduled date (March 31), which was pushed back due to the labor negotiations. The games originally scheduled for March 31 through April 6 will be made up with three games at the end of the previously scheduled regular season and as part of nine-inning doubleheaders.

What is the playoff format?

There will no longer be play-in games (aka Game 163) to decide playoff spots. All playoff spots will be determined through tiebreaker formulas.

What are other important elements of the CBA?

The five-year agreement includes increased minimum salaries (starting at $700,000 in 2022 and increasing to $780,000 by the end of the CBA), a new $50 million pre-arbitration bonus pool to reward the top young players in the game, a raise in competitive balance tax thresholds ($230 million in 2022 increasing to $244 million in 2026), a six-pick Draft lottery and limits on the number of times a player can be optioned in a season.

How will these changes affect the 2022 season?

Because of a new rule that says any player who finishes in the top two spots in Rookie of the Year voting will receive a full year of service time regardless of how many days they spend in the Majors, more top prospects could debut earlier in the season than in the past. The change in options rules is significant, as it will limit teams’ ability to continually keep their rosters (particularly their bullpens) fresh with guys taxiing back and forth from the Minors.

Will there be any changes to the amateur Draft?

Yes, there will be a lottery for the top six picks, which will be the most aggressive Draft lottery in sports. (The NBA’s lottery is for the top-four picks, the NHL’s is for the first two and the NFL does not have a lottery.)

The lottery odds will be determined by the reverse order of winning percentage, with the teams with the three worst records all having an equal chance at the top pick (16.5%). All 18 non-postseason clubs will be eligible for the lottery, though clubs that receive revenue sharing are ineligible to receive lottery selections in three consecutive years, and non-payees cannot receive lottery selections in consecutive years.

What about the International Draft?

That issue has been put on hold for now. MLB and the MLBPA have until July 25 to decide whether or not to implement the International Draft in the future. If it is agreed to, then free-agent Draft pick compensation will be eliminated. If the two sides cannot come to an agreement, then the current international signing system and Draft pick compensation system (including the qualifying offer) will remain intact.

On Sunday, March 6, the two sides met for an hour and a half. The Players Association brought a written offer to Major League Baseball detailing their latest concessions. However, MLB responded that they were still deadlocked.

The primary issue of contention is the competitive balance tax, otherwise known as the luxury tax threshold, which serves as a salary cap. The players union is currently offering $238 million per franchise, while the owners are at $220 million.

The other two points of negotiation are the pre-arbitration bonus pool and minimum salary. MLB has one of the lowest minimums in major sports.

The gap of dispute is rather minimal compared to where the two sides started, and they will likely settle somewhere in the middle. Currently, both sides are holding firm in their negotiations.

“This is a horrible, horrible situation. Everyone on the Yankees, everyone in Major League Baseball shares the blame—players, owners, executives—for where we are,” said Yankees president Randy Levine on the team’s YES Network.

“It’s a really bad look, especially what’s going on in the world,” added Levine. “We all look pretty bad. It’s embarrassing to be where we are.”

The first two series of the season have been canceled by MLB commissioner Rob Manfred. More games may be at risk as negotiations continue.

This further adds complexity as the players expect to be paid for the entire season of 162 games, and the owners want to pay for the actual number of games played.

A $1 million fund has been provided by players of Major League Baseball (MLB) to financially aid employees affected by games canceled due to the current lockout. Spring training games were scheduled to begin on Feb. 26.

The Players Union and the owners of MLB met informally Thursday after talks ceased on March 1, 2022, as the players walked away from the best counter-offer that the owners provided.

Regarding the new employee fund, the player’s association stated that the money would be administered by the players union and the AFL-CIO, which is a federation of international labor unions.

MLB players union representative Tony Clark provided a statement, saying “this fund is intended to support workers who are most affected by the MLB-imposed lockout but whose livelihoods have been disregarded by the owners in their efforts to pressure players into accepting an unfair deal.”

The players union confirmed specifically that among the employees impacted by the lockout are broadcast teams, concession workers, ushers, security personnel, transportation providers, janitors, and electricians.

Union executive board members, pitchers Max Scherzer and Andrew Miller, also provided a statement: “Many aren’t seen or heard, but they are vital to the entertainment experience of our games. Unfortunately, they will also be among those affected by the owner-imposed lockout and the cancellation of games. Through this fund, we want to let them know that they have our support.”

MLB state that the fund will be administered by the teams to part-time and seasonal workers based on financial need.

Those that are eligible include concession workers, grounds crews, clubhouse employees, ballpark workers, and security staff.