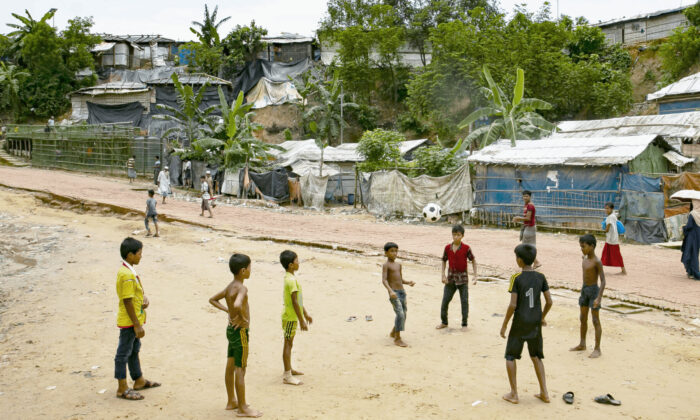 A team from the Monash Centre for Development Economics and Sustainability (CDES) has found that simple activities such as play therapy and art have proven powerful not only for improving the mental health and wellbeing of Rohingya women and children but also for preserving their traditional culture.

Lead author of the research project and CDES Director, Prof. Asad Islam, said that the play-based solution called the Humanitarian Play Lab has substantially improved the well-being of refugees who had suffered post-traumatic stress disorder, depression, and grief from forced displacement.

The children’s trauma and depression also reduced significantly, and cases of impaired growth and development and being underweight also fell.

“Mentally unhealthy mothers that received the treatment caught up to, and often surpassed the mentally healthy mothers in the control group,” Islam said.

The play labs are a new model for refugees featuring little colourful sanctuaries, shaded by bamboo verandas, and walls covered in handpainted flowers.

The ceilings are lined with shamianas, the handsewn coloured cloth Rohingya women often use for decoration.

Rather than Monopoly and Scrabble, practical toys such as cars, cooking sets, and dolls are introduced.

Children recite kabbiyas (traditional Rohingya rhymes) and teach the facilitators, who develop them into a cultural anthology.

Around 3,500 Rohingya refugees participated in the year-long program created by the international organisation Building Resources Across Communities (BRAC), which aimed at providing a safe and stimulating environment for refugees through learning, art, and play.

Forced migration has been a major driver of mental disorders among refugees due to the stress before and after their often difficult escape from their home country.

“Poor mental health of adult refugees, particularly among mothers, is considered a risk factor for the psychological well-being and development of their children,” Islam said.

“Our findings imply that policies targeting the mental wellbeing of displaced mothers can be an important stepping stone to developing psychological resilience among their children. This helps them grow into healthy, well-rounded adults.”

In 2017, the Burmese military unleashed a brutal crackdown on Rohingya civilians, sending thousands of people fleeing into neighbouring Bangladesh.

More than 877,000 refugees remain there in dire conditions.

The program has been extended to reach more than 13,000 mother-child groups but Islam says it can be scaled up much faster with the help and support of international donors.

“This intervention has been a low-cost humanitarian program delivered by volunteer facilitators in the community, it is a very cost-effective intervention compared to many other similar interventions across different settings in the world,” he said.