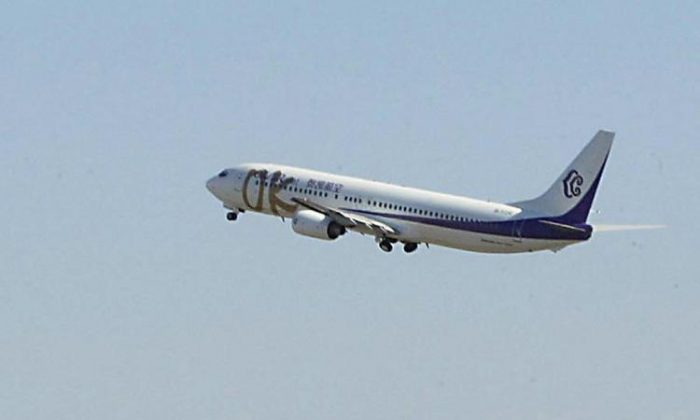 NEWARK, N.J.—Smoke reported on board an Air Transat flight forced an emergency landing Saturday, March 9, at a New Jersey airport, where the 189 passengers were evacuated by emergency slides.

Air Transat Flight 942 was on its way from Montreal to Fort Lauderdale, Florida, when it reported a possible fire in the cargo hold and was diverted to Newark Liberty International Airport at 8:30 a.m. Saturday, a Federal Aviation Administration representative said.

The Boeing 737 landed and remained on the runway while airport firefighters responded, and passengers evacuated via emergency slides, she said. Passengers were then taken by bus to the terminal.

Two of the 189 passengers reported minor injuries, neither related to smoke, and one was taken to a hospital to be examined, said Steve Coleman, deputy director of media relations at the Port Authority of New York and New Jersey.

No fire was found and the cause of the smoke remains under investigation, he said.

“Our 189 passengers’ safety is our top priority and they were evacuated promptly upon landing,” said Debbie Cabana, Air Transat marketing director.

#BREAKING An Air Transat Flight from Montreal to Fort Lauderdale had to make an emergency landing at Newark Liberty International Airport, after a possible fire was detected on the plane. #TS942 https://t.co/qrDtIVHhnA pic.twitter.com/hyfvR5VRNe

Another aircraft was to be sent to Newark to operate the flight to Fort Lauderdale, she said.

Both runways were closed during what Newark Liberty called an “airport emergency,” but officials later announced that flights had resumed.

Last week on Sunday, March 3, another plane that was taxiing at Newark Liberty Airport struck the wing of another plane, no one was injured, authorities say.

The airport said in a message on Twitter that the Southwest Airlines plane was taxiing shortly after 7 a.m. Saturday when it struck wings with a parked airliner at the airport’s Terminal A gate.

The airport said there were no injuries, and passengers were to be rebooked.

News 12 New Jersey reported that Southwest Airlines Flight 6 bound for Fort Lauderdale, Florida, began to taxi following deicing when its left wing grazed a parked plane being de-iced prior to a trip to Nashville, Tennessee. An airline representative apologized for the delays for passengers and said both planes were taken out of service for review.

Well looks like my Florida vacation will be actually be at Newark Airport because my @Southwest plane just got hit by another plane on the tarmac. #whatashitshow #thisisfun pic.twitter.com/S8kCfFToO1