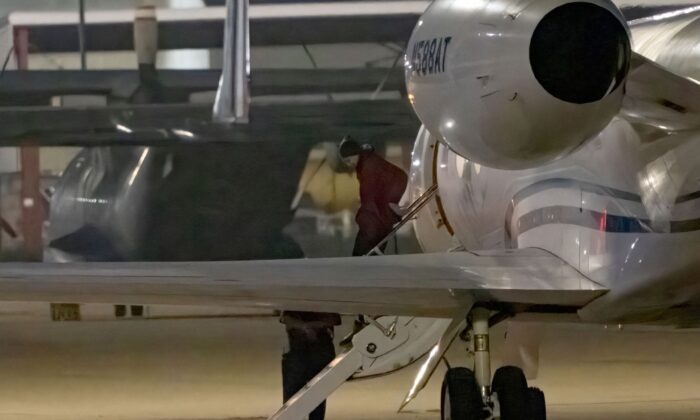 American basketball star Brittney Griner gets out of a plane after landing at the JBSA-Kelly Field Annex runway in San Antonio on Dec. 9, 2022. (Suzanne Cordeiro/AFP via Getty Images)
By Reuters

A plane carrying basketball star Brittney Griner landed in the United States early on Friday, nearly 10 months after she was detained in Russia.

Griner was released in a prisoner swap with Russia in exchange for arms dealer Viktor Bout and was heading home on Thursday, ending what President Joe Biden called months of “hell” for her and her wife.

Griner, 32, a two-time Olympic gold medalist and star of the Women’s National Basketball Association’s Phoenix Mercury, flew in to San Antonio, Texas. She was arrested on Feb. 17 at a Moscow airport after vape cartridges containing cannabis oil, which is banned in Russia, were found in her luggage.

As Griner was en route to the United States, Bout arrived in Moscow and hugged his mother and wife after stepping onto the tarmac, television images showed.

The swap was a rare instance of cooperation between the United States and Russia since the invasion of Ukraine. The two countries also swapped prisoners in April when Russia released former U.S. Marine Trevor Reed and the United States released Russian pilot Konstantin Yaroshenko.