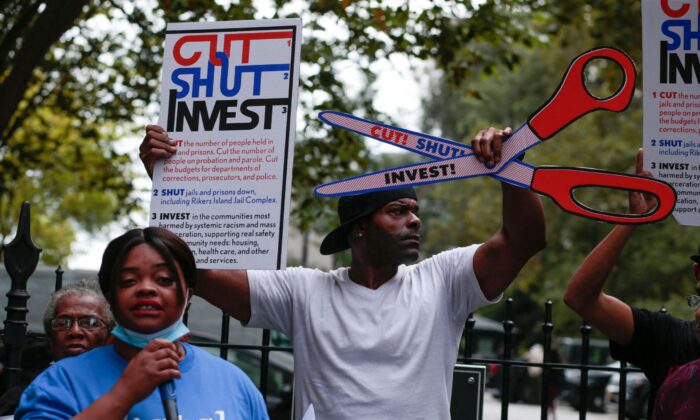 New York’s quest to replace the troubled Rikers Island jail complex with smaller facilities across the five boroughs could lead to either hazardous overcrowding or the release of dangerous detainees, according to a Dec. 1 report from the conservative Manhattan Institute.

In a Nov. 30 interview with The Epoch Times, the report’s author, Manhattan Institute fellow Charles Fain Lehman, said New York has been reducing its jail population for years.

“They’ve run out of low-hanging fruit. Now they need to start releasing serious offenders if they want to keep cutting the population,” he said.

New York is already experiencing significant increases in serious offenses. As of August, major crimes were up by 36 percent year over year, as reported by the New York Post.

Felonies on the city’s subways through October increased by 40 percent over the past year, according to the same source.

Rikers Island is located in the middle of the East River, between Queens and the Bronx.

The first jail on Rikers opened during the early 1930s. Today, the complex has a capacity of 15,000. It mainly houses individuals detained before trial. A much smaller number of convicted criminals serve short sentences at Rikers.

Reformers have worried about the poor conditions at Rikers for decades. The latest attempts to shut it down began with the Lippman Commission, led by former New York State Chief Judge Jonathan Lippman.

The Lippman Commission’s current members include the president of the Ford Foundation, the former chief operating officer of the Rockefeller Foundation, and the former director of U.S. Programs at the Open Society Foundations, which is chaired by billionaire George Soros.

The commission initially recommended that the Rikers jail complex be replaced with five jails—one for each of the city’s five boroughs—capable of housing up to 5,500 people, “with each facility proportional in size to the number of people held from that borough.”

However, as Lehman explained in his report, officials worked to reduce the prospective height and size of the facilities that would be housed in their boroughs. The city council eventually greenlit a plan to build facilities big enough for an average daily population of 3,300 throughout the system as a whole.

“It is impossible to review this story and not conclude that the 3,300 number was reached for political reasons, not because it aligned with plausible projections of how much jail capacity is needed to keep New Yorkers safe,” Lehman wrote in his report.

A 2021 report from the Lippman Commission aimed even lower.

It estimated that with additional reforms to reduce incarceration—including “a strong presumption against incarceration” for transgender, gender-nonconforming, and female people—the jail population could range to as few as 2,700 individuals.

Lehman recognizes that Rikers has many problems—for example, a high rate of drug overdoses.

“My view is that, as it is currently operating, Rikers is not healthy,” he said in his Nov. 30 interview.

However, he pointed out other factors that he sees as contributing to the complex’s dysfunction. For example, its prison guard union won’t disappear once detainees are relocated.

“The position of the people who want to close Rikers, in my view, is that there’s something spiritually deficient about Rikers Island,” he said.

Lehman, by contrast, thinks the city may be better off spending money to refurbish Rikers than building multiple jails.

Lehman concluded that New York would have a very difficult time reducing its average daily jail population to just 3,300.

“A sober analysis of the facts requires us to admit that 3,300 simply is not enough,” he wrote.

Lehman delved into the academic literature on how pre-trial detention impacts crime. His review suggested that, while jailing individuals does incapacitate them, that effect may be canceled out by jails’ “criminogenic” effect—in other words, the ways it may incline individuals to commit future crimes, possibly through the influence of other inmates who show them the ropes.

Yet according to Lehman, much of the existing research has focused on how pre-trial detention affects marginal cases. Detainees accused of far more serious offenses—those whom judges consider most likely to commit more crimes before trial—haven’t been such a focus.

“It doesn’t necessarily generalize to the serial violent felon,” he told The Epoch Times.

Lehman thinks New York’s vision would require at least some of those individuals to be released, likely to the detriment of public safety.

“Years of criminal justice reform have freed or diverted essentially all the easy-to-release cases,” he wrote.

“Many of those remaining on Rikers are serious flight risks, dangerous, or both.”

Sending Detainees to the Suburbs

Lehman’s report outlined what he sees as plausible options for the city to house detainees, should it close Rikers and discover that its five new borough-based jails lack sufficient capacity.

One such option would be to purchase and reopen shuttered jails, such as the Staten Island facility, which is now used to film the TV series “Orange is the New Black.”

“Repurchasing the site and restoring it as a jail would likely carry a hefty price tag, but it would return much-needed jail space to Staten Island, which currently has no jail,” he wrote.

Another option would be to board out more detainees to less crowded facilities in nearby counties, such as Westchester County or Long Island’s Nassau County.

Lehman thinks the risk of a mass jailbreak in such scenarios is rather low. Yet boarding out detainees would make them relatively inaccessible to their own communities—a major rationale for closing Rikers Island and opening borough-based jails in the first place.

“Proximity to your family has mixed costs and benefits,” Lehman told The Epoch Times.

He thinks elements of his analysis could apply to places other than New York. Under the influence of liberal city council members, mayors, district attorneys, judges, and other public officials, many big cities in the United States have, in recent years, pursued “decarceration.”

Lehman voiced skepticism about the idea of massively reducing or eliminating the country’s prison population, an open aim of the increasingly widespread “prison abolition” movement.

“The reality is, America’s a violent country, and we have lots of violent offenders. Most of those people should be in prison,” he said.

The Epoch Times contacted Lippman as well as numerous researchers who were cited in Lehman’s report. None of them responded by press time.