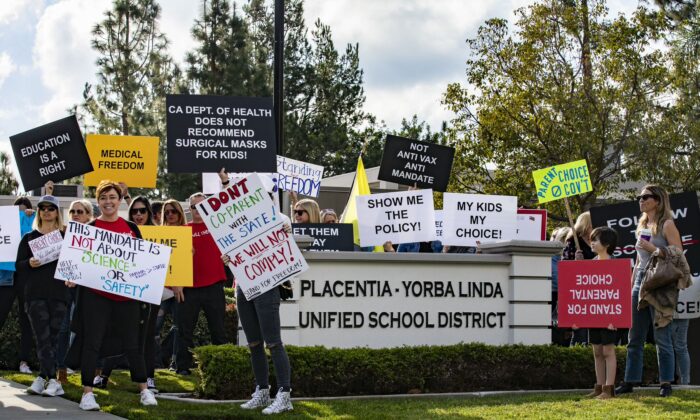 Some parents in the Placentia-Yorba Linda Unified School District have been concerned about the Social-Emotional Learning (SEL) curriculum in schools, which prompted the district’s Board of Education to reassure them that the district is using SEL in its “purest form,” free from the influence of Critical Race Theory (CRT).

Social-Emotional Learning has become more controversial within the school district—which already banned CRT from public schools on April 5, 2022—because it uses core words identical to that of CRT, such as “diversity, equity, and inclusion.”

Similar to CRT, Social-Emotional Learning doesn’t have clearly defined coursework, but rather is an abstract subject woven into activities and programs introduced to school curriculums.

A group of parents questioning the board about their support of SEL, currently used by some elementary schools in the district, received reassurance during a May 17 board meeting.

“What we’re seeing on the news, and what we’re also seeing in some programs that have attempted to try to possibly come in here is … [the teachers] say [to students], ‘Well, let’s meditate and talk about your biases.’ So that’s where it has kind of gotten hijacked [by CRT],” board member Leandra Blades said at the board meeting.

“[But] I do support this SEL-type learning … you know, in this pure form.”

First introduced in 1994 by the education nonprofit Collaborative for Academic, Social, and Emotional Learning, SEL aims at helping younger students regulate emotions while teaching older students how to discuss biases, race, sexuality, and other personal topics in order to “allow children to calm themselves when angry, make friends, resolve conflicts respectfully, and make ethical and safe choices,” according to the organization.

Because these topics are sometimes connected with discussing feelings about race, social justice, and personal biases—which critics say are similar to the subjects in the CRT curriculum—parents and educators opposed to CRT have become uneasy with the district’s inclusion of SEL.

Blades told The Epoch Times in a phone interview that she agrees with SEL when it is in its “purest form,” which teaches kids manners and how to be a better and stronger person.

“In its purest form, it helps with self-regulation, but the teacher has to be on board with trust between the teacher and the students,” Blades said. “If a student is angry with their parents, their parents are going through a recent divorce, there’s a death in the family, they’re struggling with anxiety, or [they] have a learning disability, they can have comfort with teachers to tell them what they’re struggling with so they can help them compose themselves and then return to focusing on the lesson.”

She said educators in the district can propose programs with SEL-guided teaching to be added to classrooms or after-school activities, but the review process is very strict. Proposals with similar influences as CRT are not well-accepted.

She described a recent yoga program that was submitted for review before the board that encouraged students to take moments to think about explicit social and political biases.

“That [yoga program] is terrible social-emotional learning because the goal there isn’t about the child’s state of mind. It is … about indoctrination,” she said.

The board eventually rejected the yoga program because any program with elements of CRT would be strictly shut down or redesigned by the board, she said.

Mark McDonald, a practicing child and adolescent psychiatrist in Los Angeles, described SEL as a “container,” which would be programs that can be filled with an activity or lesson. He said measurement of the positive or negative effects on the child would depend on the content included in proposed programs.

The function of a school is to instill values of discipline, he said, such as arriving on time, submitting assignments on time, showing respect for teachers and other students, and dressing in a modest manner.

He said he has seen students of local districts calling their teachers by their first name, leaving school early, bringing cellphones into the classroom, and dressing scandalously, without being disciplined by the school.

McDonald said he believes if schools can’t be trusted to handle these scenarios, they shouldn’t be trusted to handle sophisticated lessons about political, religious, or social beliefs. He said that when schools try to overstep their function, they are “dishonoring” parents’ authority and indoctrinating students instead of teaching them.