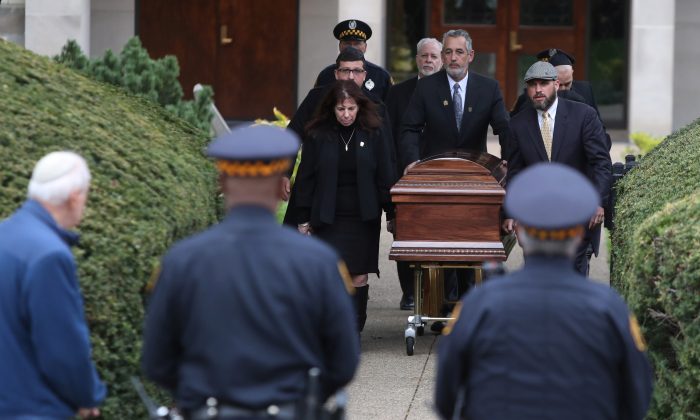 The casket of Irving Younger, 69, a victim of Saturday's synagogue shooting, is carried to a waiting hearse after his funeral at Rodef Shalom Temple in Pittsburgh, Pa, U.S., Oct. 31, 2018. (Reuters/Cathal McNaughton)
Crime and Incidents

PITTSBURGH—A federal grand jury on Oct. 31 charged the man accused of killing 11 worshipers in a Pittsburgh synagogue with additional hate crimes and firearms offenses, as the Jewish community held more funerals for victims of the worst anti-Semitic attack in U.S. history.

The 44-count grand jury indictment expands on the charges initially brought against avowed anti-Semite Robert Bowers, 46, after the massacre on Oct. 27 at the Tree of Life synagogue in Pittsburgh’s Squirrel Hill district.

“Today begins the process of seeking justice for the victims of these hateful acts,” U.S. Attorney Scott Brady said in a statement, adding that his office “will spare no resource” in doing so.

The fresh charges account for surviving victims of the massacre, including police officers. Prosecutors have said they will seek the death penalty.

Bowers is accused of bursting into the synagogue and opening fire with a semi-automatic rifle and three pistols in the midst of Sabbath prayer services as he shouted “All Jews must die.”

Eleven of the mostly elderly congregants were killed, and six people, including four police officers, were wounded before the suspect was shot by police and surrendered.

The attack, following a wave of politically motivated pipe bombs mailed to prominent Democrats, heightened national tensions days ahead of elections on Oct. 30 that will decide whether U.S. President Donald Trump will lose the Republican majority he now enjoys in both houses of Congress.

The Pittsburgh massacre also fueled a debate over Trump’s inflammatory political rhetoric and his self-identification as a “nationalist,” which critics say has fomented a surge in right-wing extremism and may have even helped provoke the bloodshed on Oct. 27.

The Trump administration has rejected the notion that he has encouraged white nationalists and neo-Nazis who have embraced him, insisting he is trying to unify America even as he continues to disparage the media as an “enemy of the people.”

Mourners gathered on Oct. 31 for the funerals of Melvin Wax, 88, who was leading Sabbath services for one of the temple’s three congregations when the attack began; retired real estate agent Irving Younger, 69; and retired university researcher Joyce Fienberg, 75.

The after-effects of the tragedy pervaded life on Oct. 31 in the city’s Squirrel Hill neighborhood, the heart of its Jewish community, where the synagogue is located.

In coffee shops, customers talked about the victims they knew, remembering them as civic-minded, kind and pillars of the community. In the street, friends embraced and comforted one another during the period of raw grief.

Libby Zal said that Younger was such a fixture in Squirrel Hill that a local store he frequented would send him a “get well” card if he was absent for a few days.

Dan Frankel, a Democratic member of the Pennsylvania House of Representatives, called Younger outgoing and opinionated.

“He was very interested in social justice and he probably would not have wanted the death penalty (for the gunman),” Frankel said.

The indictment on Oct. 31, like the criminal complaint preceding it, charged Bowers with 11 counts of obstructing free exercise of religion, resulting in death, and 11 counts of using a firearm to commit murder – one count for each worshiper killed

It added 15 criminal counts total, including new hate-crime charges pertaining to the wounding of two worshipers and the use of dangerous weapons against a dozen police officers, including the four injured in a gunfight with the suspect.

Funerals for the first four victims to be buried were held on Oct. 30 as Trump paid a low-key visit to Pennsylvania’s second-largest city, stopping briefly at Tree of Life and the hospital where the wounded officers are recovering.

His trip was greeted by thousands of protesters, who staged a boisterous but peaceful march and rally near the synagogue, demanding Trump publicly denounce white nationalism.

Trump made no public comments during his visit, but wrote on Twitter on the morning of Oct. 31 that his office had been “shown great respect on a very sad and solemn day” in Pittsburgh.

“Small protest was not seen by us, staged far away,” he tweeted. “The Fake News stories were just the opposite-Disgraceful!”

Four days after the attack, nerves in Squirrel Hill were still frayed. A public school was briefly placed on lockdown following a report that someone had brought a gun onto campus, police said. The report was later found to be false.

Jodi Smith, a Pittsburgh native, joined mourners ahead of the Wax funeral at the Ralph Schugar Chapel and remembered him as a “very polite, gentle man.”

“I could have claimed him as a father,” Smith said. “The synagogue had been his life since his wife passed away a few years ago.”

Fienberg spent 25 years as a researcher at the University of Pittsburgh’s Learning Research and Development Center until she retired in 2008.

“She was an engaging, elegant, and warm person,” the center said on Facebook.

By Jessica Resnick-Ault and Chriss Swaney