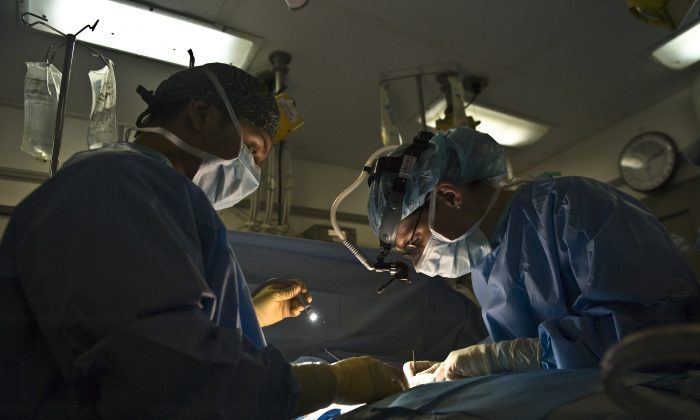 Doctors perform surgery on a patient. (Pxhere)
Crime and Incidents

Pittsburgh Doctor Accused of Performing Multiple Surgeries at Once

The United States filed a complaint, based on a two-year investigation into allegations originally brought by a former UPMC physician under the False Claims Act’s whistleblower provisions. It alleges that the defendants knowingly submitted hundreds of materially false claims for payment to Medicare, Medicaid, and other government health benefit programs over the past six years, acting U.S. Attorney Stephen Kaufman said in a statement Thursday.

The complaint alleges that Dr. Luketich—the longtime chair of UPMC’s Department of Cardiothoracic Surgery—regularly performs as many as three complex surgical procedures at the same time, fails to participate in all of the “key and critical” portions of his surgeries, and forces his patients to endure hours of medically unnecessary anesthesia time as he moves between operating rooms and attends to other patients or matters.

These practices violate statutes and regulations, including those that prohibit teaching physicians like Luketich from performing and billing the United States for concurrent surgeries, according to the United States’ complaint.

The complaint also alleges that Luketich’s practices violate the standard of care, the patients’ trust, and heighten the risk of serious complications.

UPMC did not immediately respond to a request for comment.

“The laws prohibiting ‘concurrent surgeries’ are in place for a reason: to protect patients and ensure they receive appropriate and focused medical care,” Kaufman said in a press release. “Our office will take decisive action against any medical providers who violate those laws, and risk harm to Medicare and Medicaid beneficiaries.”

“When physicians and other healthcare providers put financial gain above patient well-being and honest billing of government healthcare programs, they violate the basic trust the public extends to medical professionals,” Special Agent in Charge Maureen Dixon of the Health and Human Services-Office of Inspector General Philadelphia Regional Office said in the release. “Our agency, working closely with our law enforcement partners, will continue to thoroughly investigate such healthcare fraud allegations to protect the health of patients and the integrity of taxpayer-supported programs serving them.”

“Doctors take an oath to uphold the highest levels of ethical standards and care,” FBI Pittsburgh Special Agent in Charge Mike Nordwall said in the release. “The allegations set forth today violate those ethics, painting a picture of fraud and deception. The FBI will continue to investigate fraud in our health care system and hold those accountable to face the consequences of their actions.”

The False Claims Act is in place to combat health care fraud. The act’s whistleblower provisions authorize private parties to sue on behalf of the United States for false claims and share in any recovery, and permit the United States to intervene and take over the lawsuit, either in its entirety, or in part (as it did here). Tips and complaints from all sources about potential fraud, waste, abuse, and mismanagement can be reported to the Department of Health and Human Services, at 800 HHS TIPS (800-447-8477).