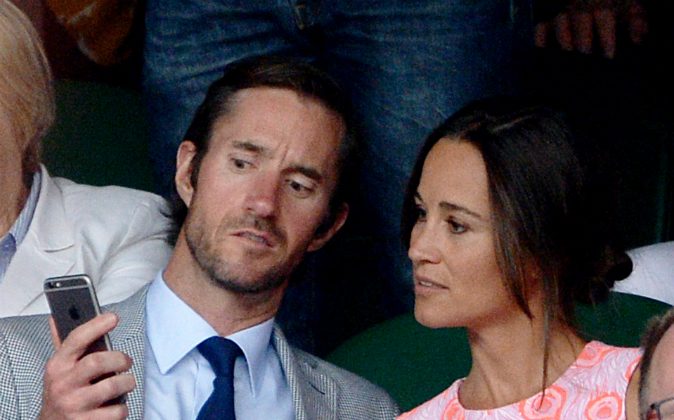 This is a July 6, 2016 file photo of Pippa Middleton and James Matthews on day nine of the Wimbledon Championships at the All England Lawn Tennis and Croquet Club, Wimbledon London. (Anthony Devlin/PA via AP)
UK

The Duchess of Cambridge will no longer be the only Mrs. in the Middleton sisterhood.

“Miss Pippa Middleton and Mr James Matthews are delighted to announce they became engaged on Sunday, July 17, and plan to marry next year,” the pair said in a statement released to the Press Association.

Matthews reportedly asked for the 32-year-old’s hand in marriage while vacationing in the Lake District of northwest England. Daily Mail reports that Matthews received permission from Middleton’s father.

“James is a traditionalist and very much wanted to do things properly. That meant getting his future father in law’s consent,” a friend of the couple told the Daily Mail’s Richard Kay.

The Middletons are pleased with the impending nuptials.

“Carole and I are absolutely thrilled with the news. They make a wonderful couple and we wish them every happiness together,” Pippa’s father said in a statement to the Press Association.

The royal family are also “absolutely delighted” about the impending marriage.

Pippa gained national attention with her form-fitting white gown for the 2011 royal wedding of Prince William and Catherine Middleton at Westminster Abbey in London. The televised event drew millions of viewers.