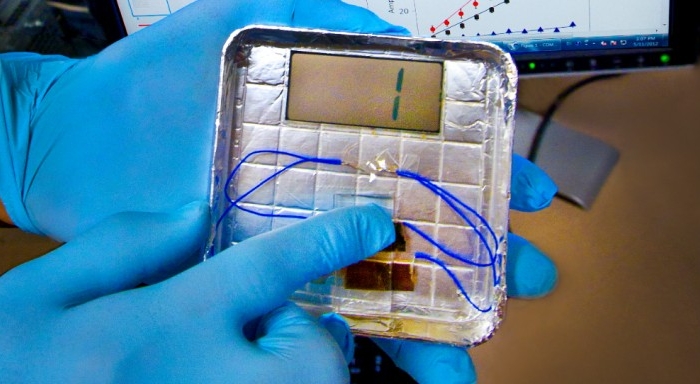 Converting mechanical energy to electricity is not a new concept, but Californian scientists do have a new approach: using viruses to harvest energy from everyday vibrations like walking.

Researchers from the U.S. Department of Energy’s Lawrence Berkeley National Laboratory have created a generator by coating stamp-sized electrodes with piezoelectric viruses. Piezoelectricity is the buildup of an electric charge in certain materials due to mechanical stimulation.

The viruses—M13 bacteriophages—can convert finger pressure on the electrode to an electric charge, generating about a quarter the voltage of a triple A battery, which produces enough current to flash the number “1” on a small liquid-crystal display.

This demonstration illustrates a potentially new way to fabricate micro-electronic devices that could be powered by activities such as climbing stairs or shutting a door.

“More research is needed, but our work is a promising first step toward the development of personal power generators, actuators for use in nano-devices, and other devices based on viral electronics,” said Seung-Wuk Lee of the lab’s Physical Biosciences Division, in a press release.

The work could lead to a better way of making piezoelectric devices and even expand its range of applications.

Currently, the piezoelectric effect is used in a variety of applications, such as the automotive industry and medical imaging, including devices like air-bag sensors, keyless door entry systems, and MRI and CT scanners.

However, the toxicities and challenges posed by conventional piezoelectric device fabrication have limited their scope.

The advantage of M13 viruses is that they are rod-shaped and self-assemble into organized layers upon which the electrodes depend. The virus also replicates quickly, so supply would not be a concern.

“We’re now working on ways to improve on this proof-of-principle demonstration,” Lee said.

“Because the tools of biotechnology enable large-scale production of genetically modified viruses, piezoelectric materials based on viruses could offer a simple route to novel micro-electronics in the future.”

The work was detailed in the early online publication of Nature Nanotechnology on May 13.

The first part of the video shows how Berkeley Lab scientists harness the piezoelectric properties of the virus to convert the force of a finger tap into electricity. The second part reveals the “viral-electric” generators in action, first by pressing only one of the generators, then by pressing two at the same time, which produces more current. Credit: Lawrence Berkeley National Laboratory