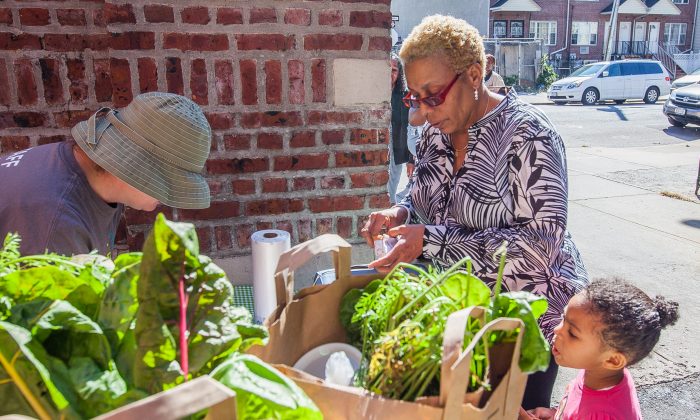 Pick Up Your Groceries While Picking Up Your Child

NEW YORK—Loaded with three big bags of fruits and vegetables, Susan Zanet got a good deal this Wednesday. Straight from a farm and only $10 for a whole bag? She would have paid double in a supermarket. And so she would rather pick up her greens while picking up her granddaughter at her local preschool.

Even though she can’t predict what’s going to be packed in the next bag, it’s usually something useful, Zanet said. This week’s special was a pack of oatmeal.

“I’m allergic to a lot of pesticides that they put in foods,” Zanet said. While veggies from a supermarket make her throat swell, she has no problem eating the ones from the preschool.

The produce is supplied by Corbin Hill and GrowNYC. Both buy straight from farmers, allowing the organizations to pay farmers more while selling the produce cheaper than other places, GrowNYC executive director Marcel Van Ooyen said.

Ooyen said 70 percent of his suppliers farm in New York and the rest in the neighboring states.

Some 900 bags were sold so far through the program, 150 at the Bishop Sexton Head Start preschool in Brooklyn where Zanet buys. And it will last until the end of October.

Anna-Maria Alleyne, Bishop Sexton director, was happy to host the program. “We jumped on it,” she said. Not only does the farm food taste better, but she can use it in meals for some 120 children the preschool serves without raising costs. Besides, she buys the veggies herself. “You can tell that it’s fresh,” she said.

Despite presenting it as a success, the Health Department doesn’t have immediate plans to expand the program to more preschools. It’s going to bring it back next season though. It costs the city $127,000 a year to run.

Even without the Health Department weighing in, Corbin Hill already provides similar services at more than a dozen churches, schools, and community centers, mainly in Harlem and Bronx. GrowNYC offers the same service at nine more sites in the city.

Still, there’s a certain convenience to picking up your child and your groceries at the same spot, said Marquel Rojas, who has a four-year-old in Bishop Sexton and orders two bags a week.