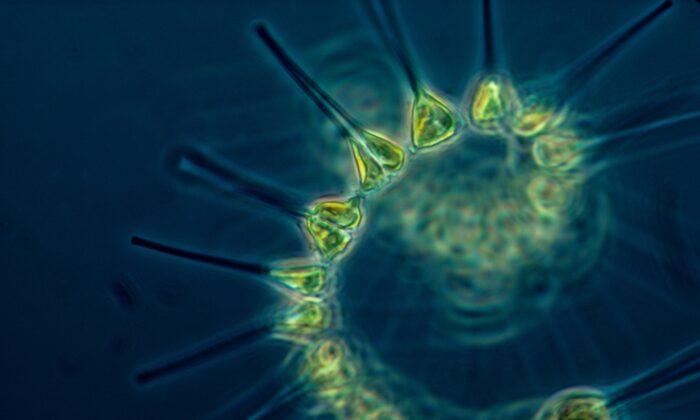 California researchers have predicted that by the end of the century, there will be an increase of up to 20 percent in tropical phytoplankton populations in low-latitude waters.

Using real-world data collected from a massive census of marine phytoplankton, or microscopic floating plants, to inform a neural network-driven Earth system model, oceanographers from the University of California–Irvine (UCI) made a surprising find that was published in the journal Nature Geoscience on Jan. 27.

The researchers found that populations of phytoplankton are likely to increase by 2100, contrary to widely-accepted laboratory-based assumptions that have led scientists to predict that phytoplankton will decline as a result of changing conditions associated with climate change, UCI said.

Phytoplankton are extremely diverse and fill the surface waters of most rivers, lakes, and oceans where there is plenty of sunlight for photosynthesis. They form the bottom of the marine food chain, and are thought to produce half to 85 percent of all the oxygen in Earth’s atmosphere.

Lead researcher Adam Martiny, professor of oceanography at the UCI, said that many scientists expect phytoplankton to struggle as the oceans become increasingly stratified with climate change, with warming sea surface temperatures and fewer nutrients available at the surface where the phytoplankton grow.

“All the climate models have this mechanism built into them, and it has led to these well-established predictions that phytoplankton productivity, biomass, and export into the deep ocean will all decline with climate change,” said Martiny.

Studies conducted previously have shown higher levels of chlorophyll in ocean water collected farther away from the equator than in warmer, tropical waters.

“The problem is that chlorophyll is not everything that’s in a cell, and actually in low latitudes, many plankton are characterized by having a very small amount of it; there’s so much sunlight, plankton only need a few chlorophyll molecules to get enough energy to grow,” Martiny said.

“In reality, we have had so far very little data to actually demonstrate whether or not there is more or less biomass in regions undergoing stratification. As a result, the empirical basis for less biomass in warmer regions is not that strong.”

Martiny and his team analyzed samples of phytoplankton communities collected from more than 10,000 locations around the world, hoping to construct a more accurate ocean systems model.

The researchers found that tropical waters had surprising levels of phytoplankton abundance, most of which were tiny cells called picophytoplankton, which make up 80 to 90 percent of plankton biomass in warmer areas.

The team then compared the quantity of phytoplankton biomass along the gradient of temperature against global maps and found that by the end of the century, phytoplankton abundance could increase by up to 20 percent in many areas.

“In many regions, there would be an increase of 10 to 20 percent in plankton biomass, rather than a decline,” Martiny said. “Machine learning is not biased by the human mind.

“We just give the model tons and tons of data. But these sorts of artificial intelligence tools can help us challenge existing paradigms.”