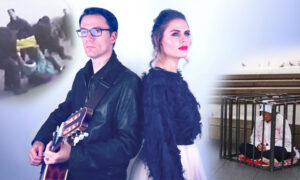 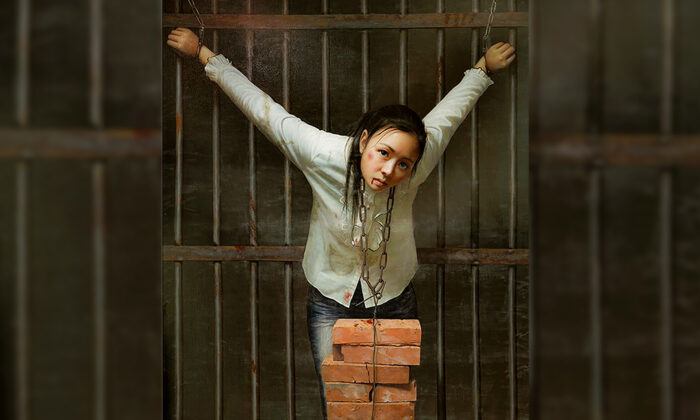 A painting depicting the “hanging bricks around the neck” torture method. It is one of the most common torture methods used to break the spirit of determined Falun Gong practitioners and coerce them to renounce their faith. (FalunArt.org)
China Human Rights

‘We have 108 types of torture methods! Do you think you'll leave here alive?’
By Jocelyn Neo

In its 2021 annual report, the United States Commission on International Religious Freedom (USCIRF) has categorized China as one of the world’s key countries ambitiously engaged in “egregious violations” of religious freedom and human rights.

Commissioner Gary L. Bauer said in the report that communist China had been denying its citizens “the right to seek and worship God.”

The victims who survive the CCP-led violent suppression or who are able to escape and seek refuge in other countries have been bravely stepping forward to expose the inhumane treatment and torture being carried out behind the communist regime’s impenetrable terror walls of prisons, forced labor camps, and “reeducation” centers.

The CCP officials and guards have devised many torture methods to painfully coerce these religious believers—be it Christians, Uyghurs, Falun Gong practitioners, or Buddhists—to renounce their faith and hail the communist party as supreme, enshrining it even above the divine.

Minghui.org, a U.S.-based all-volunteer organization dedicated to reporting on the persecution of Falun Gong in China, has documented over 100 torture methods routinely used to coerce these meditation practitioners, with many of the methods also being employed on other religious believers. Falun Gong, also known as Falun Dafa, is a mind-body practice that includes meditative exercises and moral teachings centered around the core tenets “truthfulness, compassion, and tolerance.” The practice has been persecuted by the CCP since July 1999, and tens of thousands of adherents have been arrested, detained, and tortured.

According to a Minghui.org report, the head of the No. 3 Division at the Jilin Women’s Forced Labor Camp, in Jilin Province, openly threatened a Falun Gong practitioner, saying, “We have 108 types of torture methods! Do you think you’ll leave here alive?”

Here are some of the most inhumane torture techniques commonly used in communist China’s jails, labor camps, and “reeducation” centers.

Hanging Bricks Around the Neck

Hanging heavy objects around the neck is one of the most common torture methods used to break the spirit of determined Falun Gong practitioners.

An ex-convict, who had his sentence reduced by 8 years for helping to torture prisoners of conscience, including Falun Gong practitioners and members of The Church of Almighty God (CAG), recounted to Bitter Winter how inmates torture the believers.

“The means to transform believers varied—from regular beatings to torture, like keeping believers in cold water in sub-zero temperature or hanging a 10-kg water bucket around their neck,” the former inmate said. “The prison guards would pretend not to see these violent acts.”

“Whipping people is such a tiring job!” said inmate Gao Minglong at the Siping Prison in Jilin Province, after he stripped Falun Gong practitioner Liang Zhenxing naked and started whipping him on the back.

“I hadn’t beaten anyone for years. I had so much fun today! Whoever refuses to listen to me, come here and I’ll teach you a lesson!” Gao added, according to a witness who saw the torture, Minghui.org reported. Liang died in May 2010 due to whipping and other torture.

Qin Jing, a CAG member, had his fingers and toes whipped by a long bamboo rod when he was in police custody, reported Bitter Winter. “Every whip caused a piercing pain, my fingers, and toes covered with blood as they whipped me unceasingly, leaving my hands and feet swollen and in unbearable pain,” he said.

Electrocution is one of the routine torture methods used on religious followers of all faiths. An elderly Christian man from the CAG in China’s Jiangsu Province was arrested in July 2020 and severely tortured during the interrogation, according to a report by Bitter Winter.

“A police officer poked me with an electric baton that crackled constantly,” said the man, who is in his 70s. “He poked my private parts twice, causing unbearable pain.”

Tursunay Ziawudun, a Uyghur woman who fled to the United States, told the BBC that she was shocked with an electric baton and gang-raped three times. “The woman took me to the room … They had an electric stick, I didn’t know what it was, and it was pushed inside my genital tract, torturing me with an electric shock,” she said.

The CCP has constantly used gang rape and sexual abuse as a genocidal tool to eliminate faith and to persecute those who refuse to submit to the communist ideologies. A CAG female member, Gao Jie, told Bitter Winter how some female guards forced her to have sex with a male guard after they stripped her naked and bathed her.

“Fortunately, I was having my period at the time, so I narrowly escaped this,” she said.

In one report, Minghui.org documented how 18 female Falun Gong practitioners held at the notorious Masanjia Forced Labor Camp in Shenyang, Liaoning Province, were thrown into the men’s cells and the inmates were encouraged by the guards to rape the practitioners. In another instance, a 9-year-old girl, who was the orphan child of a Falun Gong practitioner, was raped by three men at a mental hospital in Beijing.

Often, detained Falun Gong adherents who go on extended hunger strikes to protest their unlawful arrest are brutally force-fed by having their mouths pried open, which leads not only to damaged teeth and gums but, at times, to severe mishaps. Policemen, doctors, and prison guards team up to force-feed them “meals” laced with toxic nerve-damaging drugs, mixed with hot chili peppers, salty water, and even feces.

For instance, Chu Lin, a Falun Gong practitioner, went on a hunger strike after being arrested in April 2004. The police who took part in force-feeding her mistakenly inserted the feeding tube into her trachea, causing her to go into a coma due to suffocation. Despite this, the police said, “We are not responsible for her death.”

Another grossly inhumane torture method is burning mosquito-repellent coil near the face or stuffing nostrils with cigarettes to force prisoners of faith to inhale the toxic fumes. The torture leads to nausea, vomiting, and causes a green liquid to flow from their nose.

The tiger bench is another infamous torture method routinely used in detention centers or prisons. The victim is made to sit on a “tiger bench” with legs stretched out and tied down tightly with several straps or belts. Then, heavy objects such as bricks are stacked under the victim’s feet until the belts snap. The torture inflicts unbearable pain, making the victim lose consciousness.

The death bed is another inhuman device to coerce prisoners of faith, especially Falun Gong practitioners.

The victim’s hands and feet are cuffed and then tied to a bed with ropes, making it almost impossible for the person to move even a little. With the victim’s arms and legs extremely stretched and tied, this torture causes excruciating pain and wounds if the person tries to move.

Another method used is called stretching torture. The victim is tied to the four corner posts of the bed and hung in the air for a long period of time, which can easily cause the person to become disabled.

Shackled to the Ground

This is used to inflict pain and restrict movement. The prisoner of faith is cuffed and shackled to the ground. After being chained in this position, the victim can neither stand up nor squat down, and is unable to move. With time, pain and numbness ensue.

It is not uncommon for the Chinese police to employ red-hot iron bars to burn practitioners’ thighs or chests.

Jiao Lin, a Falun Gong practitioner in Fengcheng City, Liaoning Province, was burned on his jaw by police with cigarette butts and lighters, reported Minghui.org. Another adherent, Lang Qingsheng, had his nostrils stuffed with lit cigarettes.

Pliers are used on Falun Gong practitioners during force-feeding to pry open their mouths.

Hou Manyun of Hebei Province wrote in her personal account to Minghui.org how a doctor hit her face with a pair of pliers before prying open her mouth to force-feed her. The doctor also stabbed her throat many times with a knife while shouting, “You don’t want to eat? Don’t want to eat? I’ll make sure you don’t eat.”

Besides using the pliers to pry open the mouth, the tool is also used to pinch the victim’s body or fingernails. Xiao Shufen of Heilongjiang Province had her fingernails pinched when illegally taken into police custody.

The communist police are also known to use loud sound as a form of torture, resulting in many prisoners of faith enduring hearing loss or becoming mentally disordered.

A female CAG member told Bitter Winter that authorities at the reeducation center where she was detained forced her to watch videos defaming the CAG while turning the volume to the maximum. She started experiencing ringing noise in her ears after a short time and had irregular heartbeats. Moreover, the authorities tried to scare her from behind with loud noises. She eventually became depressed and disoriented.

“I wanted to die, felt like committing suicide. I was pondering what I could use to hang myself or cut my wrists,” the woman said. “I also thought of knocking my head against the wall but was afraid that it would not be enough to kill me. How I wished not to wake up!”

Minghui.org reported that when Zheng Hua of Chifeng City, Inner Mongolia Autonomous Region, was in police custody for refusing to renounce her faith in Falun Gong, she was tied to a metal chair and a metal bucket was put over her head. The police then beat the bucket while shocking her with electric batons at the same time.

Jocelyn Neo
Jocelyn Neo is a writer who focuses on China-related topics and life-based stories that inspire hope and humanity.
TOP NEWS