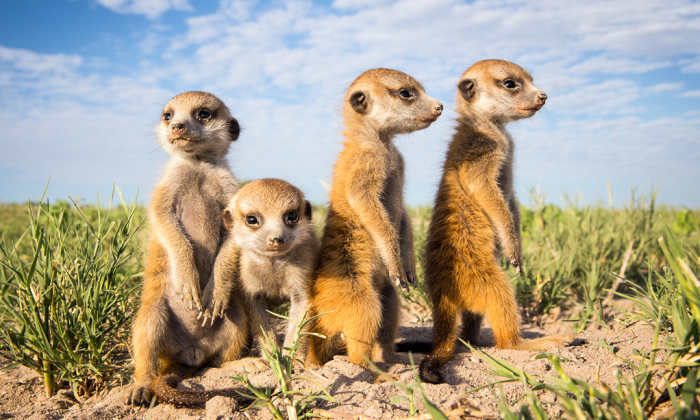 African wildlife photography at its most playful, the pint-sized meerkats treat the photographer like a big, strange-looking brother.

UK photographer Will Burrard-Lucas spent some time with baby meerkats in Africa and became so familiar they treated him as one of the family. Though meerkats, part of the mongoose family, are completely wild in the desert region of southern Africa, they are often habituated to humans and will even climb up to sit on humans.

They live in burrows and one will often see a few of them pop up to look out for predators. Meerkats are omnivores: their food includes scorpions, birds, lizards, and berries. They communicate with each other by making purring sounds as well as shrill sounds. Many readers may be familiar with the famous meerkat, Timon, from Disney’s “The Lion King.”

Burrard-Lucas spent some time as a child in Tanzania. He travels to many places to take photos, but right now he is happy to be photographing African wildlife. He is very passionate about wildlife conservation, and has therefore partnered up with a number of conservation organizations, including the David Shepherd Wildlife Foundation and the Ethiopian Wolf Conservation Programme.

To film animals more dangerous than the meerkat, he invented the BeetleCam, which can roll in by remote control for the perfect shot.

Will Burrard-Lucas’s BeetleCam invention, meant to help him take photos of dangerous animals without getting too close himself. (Burrard-Lucas Photography)