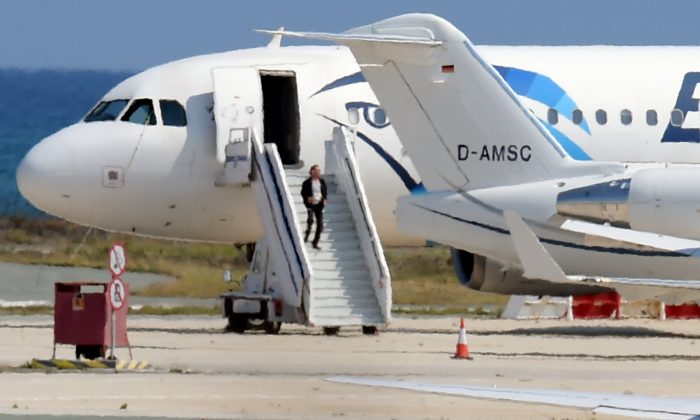 A man believed to be the hijacker of the EgyptAir Airbus A-320, which was diverted to Cyprus, leaves the plane before surrendering to security forces after a six-hour standoff on the tarmac at Larnaca airport's largely disused old terminal on March 29. The hijacker has been detained. (GEORGE MICHAEL/AFP/Getty Images)
Africa

A number of photos have emerged depicting the March 29 EgyptAir hijacker acting casually, while wearing an explosive belt.

The hijacker was identified as Seif Eldin Mustafa by the Cyprus foreign ministry.

Mustafa is calmly posing while wearing a fake explosives belt in a number of photos surfacing on Twitter, and apparently shown on Egypt State Television.

Another alleged picture of the hijacker, guy next to him doesn’t seem too worried though #Egypt #Cyprus pic.twitter.com/gyUHzPcEuH

Mustafa, an Egyptian national, allegedly gained access to the jetliner’s cockpit using only several iPhone cases and a cloth—and when searched after the incident, his depicted explosives belt didn’t turn up any explosives.

“Security in Cyprus confirmed that the explosive belt worn by the man who hijacked the plane was fake,” said Egypt’s Civil Aviation Ministry following the bizarre incident.

The ministry said the plane had several foreign passengers aboard: Eight Americans, four Brits, four Dutch, one French, one Italian, and one Syrian.

Appearing to be in his late forties or early fifties, Mustafa forced pilots to divert the Cairo-bound plane to Lanarca airport in Cyprus—but only after being told there wasn’t enough fuel to make it to Istanbul, Turkey. The original flight, from Alexandria to Cairo, usually takes 30 minutes.

Mustafa’s stunt led police to a six-hour standoff. Initially, the hijacker let go all but four crew and three passengers. Eventually, he released everyone unharmed before exiting the plane and surrendering to police.

Official sources at EGYPTAIR declared the release of all the hostages and the arrest of the hijacker. #EgyptAir

Although his motives aren’t completely clear, many reports surfaced saying he had committed the act because of his ex-wife, who was located in Cyprus. Others say he had hijacked the plane because he was distraught over female driven slavery.

Watch Cyprus President Nikos Anastasiades laugh at #EgyptAir hijacking, saying it “is all to do with a woman”. pic.twitter.com/qcmpKObRHI

Almost all reports confirmed that Mustafa seemed to be in a “fragile” or “unstable” state, after surrendering himself to authorities.