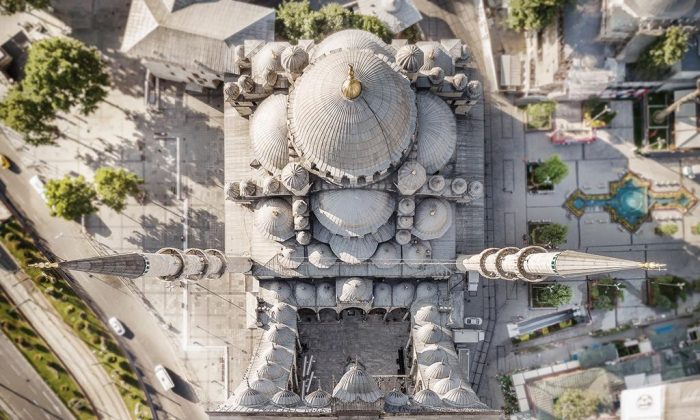 Do you remember having some incredible dreams in childhood? Dreams about strange worlds where the laws of time and space, as we know them, didn’t apply?

Well, Turkish visual artist and photographer Aydın Büyüktaş apparently used to have some pretty incredible dreams. And he figured out how to recreate them in a staggering way.

“During childhood and puberty, I spent a lot of time reading science fiction series of science fiction writers like Isaac Asimov, H.G. Wells, and science fiction journals. These books helped me to question things like wormholes, black holes, parallel universes, gravitation, bending time, and space,” he wrote to me in a Facebook interview, translated by Epoch Times Turkish correspondent Emel Akan.

“In the years 2003-2004, when I started to deal with visual effects and animation, I started to realize that I would be able to create the surreal places that I had been thinking about or seeing in my dreams since childhood,” he said.

And he achieved just that in his projects Flatlands and Parallel Universes. He bends the landscapes of Istanbul or stacks them on top of themselves, giving us some mind-boggling imagery.

Well, “simple” may not be the right word.

“I have worked on the planning phase for two months,” he said. “I have planned every single detail, including the spots to take photos, the desired slope, and all the spots for merging them.”

But thanks to that, he didn’t need to manipulate the photos, he said.

Photographer: Shen Yun, ‘The eighth wonder of the world’

“In the science fiction books I read when I was a child, I learned that parallel universes existed but they were far away from us,” he said. “I was imagining those very close to us and these photos are a product of those imaginations.”

Aydın Büyüktaş was born in Ankara in 1972. He dropped out from Bilkent University Tourism Management Department “because it was not his future dream,” his Facebook page states. After moving to Istanbul in the 2000s, he was involved in movies and advertising production. He also worked for companies like Sinefekt and Makinefx and in the fields of visual effects, 3D, animation, and video.

Meanwhile, he was also interested in photography and since 2012 he studied photography at Mimar Sinan Fine Arts University.

He sees photography as a way to express himself. “[I]t is a tool that I can use to express things in my mind,” he said.