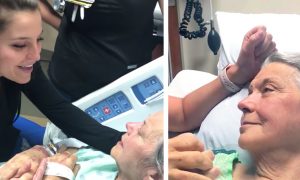 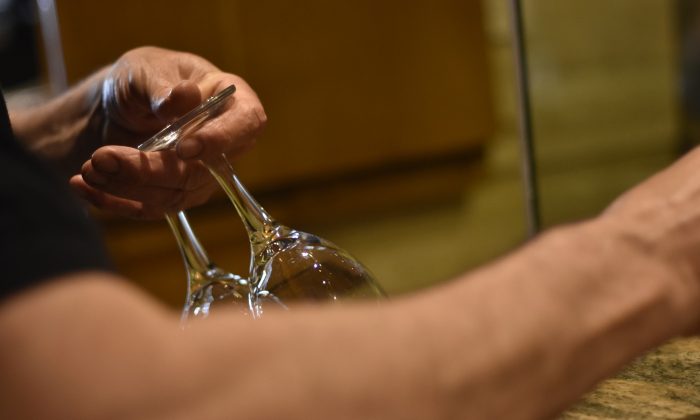 In this file image, a waiter carries a pair of wine glasses. (Pixabay)
Lifestyle

The moment a young waiter sat opposite a 91-year-old veteran in a Pennsylvania restaurant, listening attentively while on his break, went viral after another customer was touched by his kindness and posted pictures to social media.

The pictures, which racked up almost 200,000 “likes” within two days, were taken by Lisa Meilander on Aug. 18 as she ate at the Eat’n Park in Belle Vernon.

“The elderly gentleman was seated in the booth directly across from my family as we ate dinner Saturday night,” Meilaner wrote in her Facebook post. “We really didn’t see him come in. But we did notice when our server, Dylan, dropped to one knee to look him eye-to-eye as he got ready to take his order.”

The elderly man, identified only as Frank, said he didn’t hear well and had forgotten to put in his hearing aids. He then began to explain how he had lost his hearing during the war.

“Eventually the man apologized for talking so much, said Meilander. “‘I’m alone now,’ he said, ‘and I don’t often have someone to talk to.’ Dylan smiled and said he enjoyed listening. He then helped him figure out what to order and left to take it to the kitchen.”

When it was his break, the waiter, Dylan Tetil, asked if he could sit with the gentleman as he ate.

Tetil told WTAE that he felt his actions were “just normal” and were “what everyone should be doing.”

Writing on Facebook later, Tetil said he was ignoring the “jealous” and “negative” comments. “At the end of the day, I don’t care,” he wrote. “I treat every individual I wait on / come into contact with just like that older gentleman. You treat me with respect you get it back, always been like that.”

Meilander told Good Morning America, “It was such a sweet interaction—I wanted to acknowledge Dylan for his compassion.”

“I am totally amazed at the response to my photos and story.”

She wrote on Facebook that the moment had rekindled her faith in young people’s values.

“With all of the negative stories about our youth today this was a breath of fresh air. I wonder if I would have been as kind and attentive if I were the one working there.”

Meilander said that she tried to pay for the man’s dinner, but found another customer had already jumped in to get the check.

“As we left the restaurant the two of them were conversing and many people seated nearby were smiling,” she wrote. “It was a touching sight.”