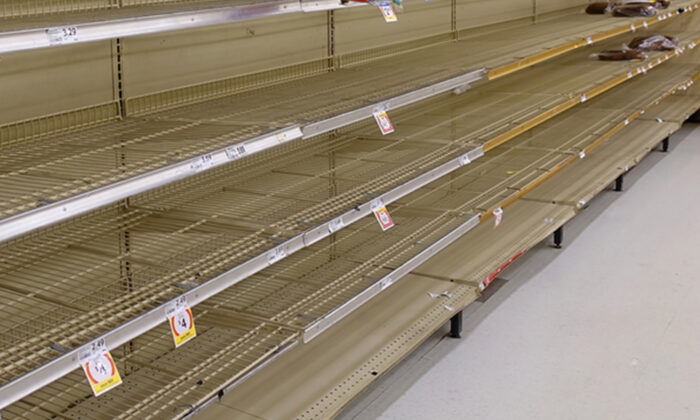 An elderly woman photographed staring at the empty shelves of a Coles grocery store in Melbourne, Australia, exemplifies the heartbreaking—and potentially life-threatening—impact of panic buying amid the Chinese Communist Party (CCP) virus pandemic.

The photo was taken at the Port Melbourne Coles store on March 19, 2020, by Nine News journalist Seb Costello, who posted the photo on Twitter beside the caption, “Midday today. Port Melbourne Coles. Canned food aisle. I’m told she was in tears. This captures who is suffering from the ‘me first,’ unnecessary trend of panic buying.”

In the photo, the elderly woman stands next to her shopping cart looking bereft in front of row upon row of empty shelves. The photo quickly went viral, contributing to public outcry about the phenomenon of panic buying and highlighting the plight of an already highly vulnerable community.

According to Coles Chief Operations Officer Matthew Swindells, this encounter need never have happened. “It’s not a problem of supply,” said Swindells, as per 7 News, “it’s a problem of demand.”

“We have done three Christmases [worth of sales] in three consecutive weeks from a standing start,” Swindells explained. “When you see that immediate lift in demand across a network as large as Coles, it punches a huge stock hole in our supply lines and it takes time to recover.”

Hundreds of netizens responded to Costello’s photo on Twitter. Many expressed outrage and deep sympathy for the elderly shopper.

“This really breaks my heart,” wrote one Twitter user, “the elderly have already given to society, why aren’t we looking after them? We will be them sooner than we realize. Bring in rationing … please let’s look after the vulnerable.”

“This is our local supermarket and it’s disgusting,” wrote another. “Taking the trolleys away is a great idea and also limiting every single item in the whole place to one. And holding essentials out the back for the elderly that come in throughout the day.”

As per the CDC, older adults and people of any age who have serious underlying medical conditions could be at higher risk for serious complications if they contract the CCP virus.

The photo of the Port Melbourne pensioner, who remains anonymous, went viral just 24 hours after a verbal precaution against panic buying was delivered in a press conference to the Australian nation by Prime Minister Scott Morrison. Australia’s major grocery stores, he advised—Coles, Woolworths, IGA, and Aldi—are not closing.

“I can’t be more blunt about it. Stop it. It’s ridiculous,” Morrison said, as per News.com. “It’s un-Australian, and it must stop. It is not sensible and it is not helpful.”

“It has been one of the most disappointing things I have seen in Australian behavior in response to this crisis,” Morrison continued, referring to panic buying. “That is not who we are as a people. It is not necessary.”

“We saw a number of people who [were] looking at these shelves and you can’t help but feel for them, feel desperately for them because they feel uneasy and feel like they won’t be able to get their supplies,” said Stefanovic, as per News.com. “They feel alone and isolated and like no-one is looking out for them.”

Two days before Costello posted his heartbreaking photo on social media, some grocery stores did respond to the impact that panic buying is having on more vulnerable members of the community.

As per Yahoo News, Coles, Woolworths, and Aldi enforced purchase limits on certain items, and as of March 17, Woolworths’s first open hour of the day is reserved exclusively for elderly and disabled customers. Grocery stories internationally have followed suit in an effort to show solidarity at a time of great uncertainty.

Plan is to start using the new style immediately, please inform your teams.
Tomorrow Stephen plans to write an editorial that we can start linking to as well.