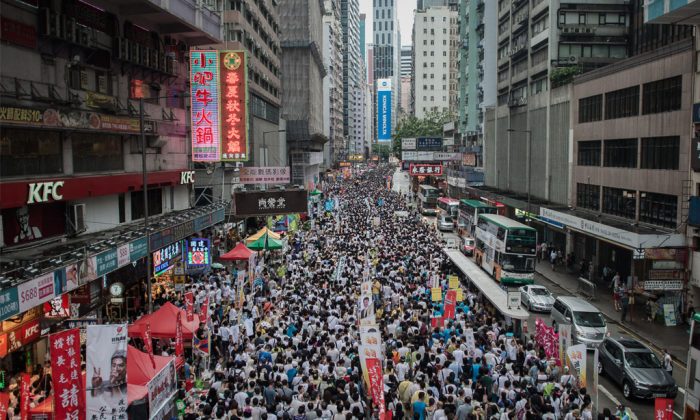 Demonstrators march during a pro-democracy rally seeking greater democracy in Hong Kong on July 1, 2014 as frustration grows over the influence of Beijing on the city. July 1 is traditionally a day of protest in Hong Kong and also marks the anniversary of the handover from Britain to China in 1997, under a 'one country, two systems' agreement. (Philippe Lopez/AFP/Getty Images)
Asia & Pacific

Hong Kong July 1 March Photo Essay: On July 1, 2014 hundreds of thousands of Hong Kong people took to the streets in a peaceful and orderly manner, protesting against the Chinese Communist Party for interfering with Hong Kong and trying to damage the one country, two system policy and asking Chief Executive Leung Chun-ying to step down. The march was an act of defiance, as a recent white paper issued by the Chinese regime was widely viewed in Hong Kong as an attempt to intimidate the Hong Kong people.