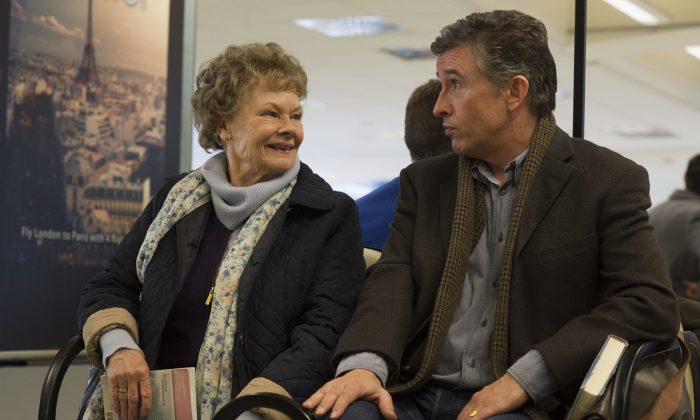 At least the Irish nuns of Roscrea convent are not cannibals, but that is about all they have going for them. In the early 1950s, they took in “shamed” young women, forcing them to serve five years of indentured servitude, even after their children had been “sold” to adoptive parents.

For decades, Philomena Lee had searched in vain for her son Anthony, but she will finally get some answers when she teams up with a disgraced Labour press flack slumming as tabloid freelancer. Prepare to laugh a little, cry a little, and learn a little bit about yourself with Stephen Frears’ shamelessly manipulative Philomena.

A few hours after finally learning she could have a half brother out there, Lee’s daughter pitches her story to Martin Sixsmith. Hung out to dry by the Labour Party over some petty kerfuffle, he is looking to grind out a few human interest pieces. As an Oxford educated hipster atheist, he instinctively looks down on the simple, devout Lee. However, he recognizes the elements of a juicy tear-jerking exposé.

With his new scandal sheet picking up the tab, Sixsmith follows Anthony’s trail from Ireland to America, with Lee in tow. Yet, a few phone calls and an internet search in the airport are all Sixsmith really needs to crack the case. Renamed Michael Hess by his parents, Lee’s Anthony became a high-ranking insider in the Reagan and H.W. Bush administrations. He was also a closeted gay man, who tragically died of AIDS. It turns out it isn’t just the nuns who are meanies. Republicans are not very nice either, because they did not indiscriminately shovel our cash at AIDS causes.

Steve Coogan and Jeff Pope’s screen adaptation of Sixsmith’s book is so preoccupied with score-settling, it is frankly rather embarrassing, like that obnoxious relative at Thanksgiving dinner who insists on revisiting each and every perceived slight.

If truth be told, they share Sixsmith’s initial contempt of Lee, portraying her as a tacky rube, devouring trashy romance novels and desperately clinging to her blind Catholic faith, despite all the dirtiness done unto her by the Sisters. Lee deserves better than she gets from Dame Judi Dench’s shticky Oscar trolling performance.

Even when Dench’s Lee offers her unsolicited forgiveness to the nasty old nun most responsible for Roscrea’s problematic past, what should have been a heavy moment is reduced to a few trite exchanges.

For a film wrapping itself in the “feel good” mantle, “Philomena” is surprisingly mean-spirited. If you do not share its politics, you are necessarily morally and ethically suspect. If you were not educated at the right schools, you must be an unsophisticated simpleton, like Lee. If you have faith, you are by definition an idiot. Yet, it is the Church that is narrow-minded and judgmental.

Essentially, Philomena is an echo chamber for those who share its prejudices. It gins up plenty of outrage, but it is hollow in the middle. Not recommended, Philomena is showing at Paris Theatre uptown and the Angelika Film Center downtown in New York City.