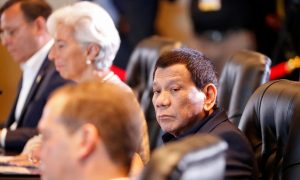 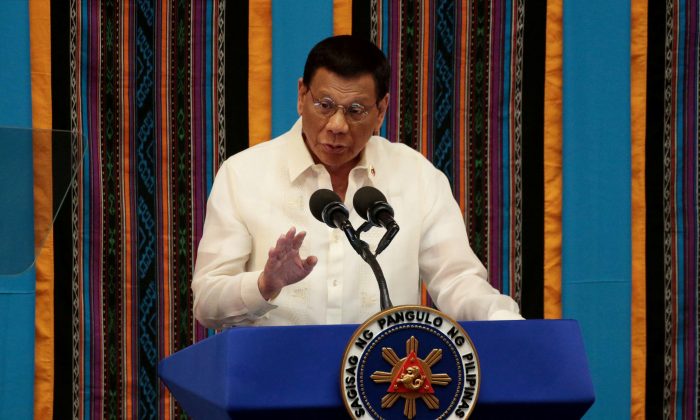 MANILA—Philippine President Rodrigo Duterte has warned of “unfriendly” treatment for foreign ships traveling in the country’s territorial waters without permission, in a rare swipe at China’s use of warships just a few miles off Manila’s coast.

Duterte’s frustration over multiple sightings this year of Chinese warships moving within the country’s 12-mile territorial sea, at various locations in the archipelago, was relayed on Aug. 20 by his spokesman Salvador Panelo.

“All foreign vessels passing our territorial waters must notify and get clearance from the proper government authority well in advance of the actual passage,” Panelo said in a statement, quoting Duterte.

Panelo did not refer to China by name, nor elaborate on what that enforcement might entail.

Defence Secretary Delfin Lorenzana told reporters an unfriendly response could involve escorting the unwelcome vessel out of the area. “There are so many things that we can do to be unfriendly,” he said.

The Philippines has lodged several diplomatic protests in recent weeks over the activities of Chinese coastguard, navy and paramilitary fishing vessels in Philippine-controlled areas of the South China Sea and in its territorial waters.

The armed forces has released images and cited witness sightings between February and early August of Chinese warships off Palawan and Tawi Tawi islands, a pattern that Lorenzana last week described as an “irritant.”

“The frequency has increased also, so it’s very alarming why so many navy ships of the Chinese are passing through,” he said.

Duterte is facing heat at home for what critics say is his passive approach to Chinese provocations in exchange for a business relationship with Beijing that is not working out well for him, with promised investments slow in coming.

Though surveys consistently show Duterte enjoying a level of domestic approval never seen at this point in a presidency, the same polls show growing disdain for China over its conduct in the South China Sea, and reservations among some Filipinos over a massive influx of Chinese online gaming workers under Duterte.

Duterte will visit China from Aug. 28 to Sept. 2, his spokesman said. He has promised to discuss a South China Sea 2016 international arbitration victory over China with counterpart Xi Jinping.

Duterte has until now chosen not to push that ruling, which invalidated China’s claim of sovereignty over most of the South China Sea. Beijing did not participate in the court proceedings and rejected the ruling.

The South China Sea is a vital route for ships carrying more than $3 trillion in trade every year. The Philippines, Malaysia, Vietnam, Taiwan and Brunei also have overlapping claims to parts of it.