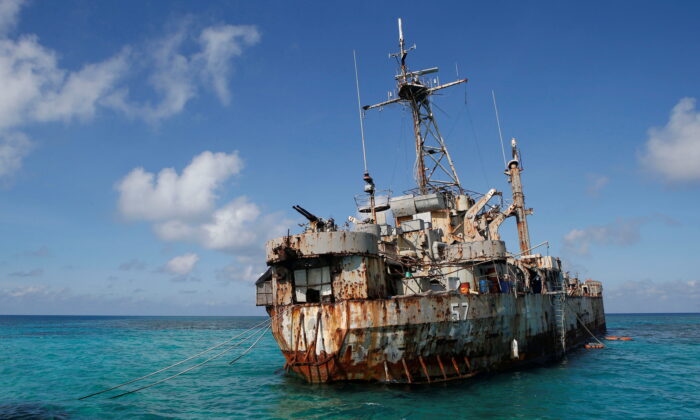 The BRP Sierra Madre, a marooned transport ship which Philippine Marines live on as a military outpost, is pictured in the disputed Second Thomas Shoal, part of the Spratly Islands in the South China Sea March 30, 2014. (Erik De Castro/Reuters)
Asia & Pacific

Philippines Tells China to ‘Back Off’ in South China Sea

The Philippines has told China to “back off” from its territorial zone, reporting that three ships from the Chinese coastguard had blocked and used water cannons on two Filipino supply boats en route to a Philippine-occupied shoal in the disputed South China Sea.

Foreign Affairs Secretary Teodoro Locsin said on Nov. 18 that the Filipino boats were transporting food supplies to military personnel stationed in Ayungin Shoal (Second Thomas Shoal) on Nov. 16 when they were forced to abort the mission.

Second Thomas Shoal lies off western Palawan province in the Philippines’ internationally recognised exclusive economic zone. The Philippines has occupied the shoal since 1999 after intentionally grounding a navy ship on the reef.

“Ayungin Shoal is part of the Kalayaan Island Group (KIG), which is an integral part of the Philippines, as well as the Philippines’ exclusive economic zone and continental shelf, and over which the Philippines has sovereignty, sovereign rights and jurisdiction,” Locsin wrote in a statement shared on social media by the foreign ministry.

The Philippine government also condemned the three Chinese coastguard vessels’ illegal actions, directing them to “take the heed and back off,” reminding China that a public vessel is covered under the Philippines-United States Mutual Defence Treaty.

China’s failure “to exercise self-restraint threatens the special relationship” between the two countries, Locsin said, adding that he has conveyed “in the strongest term” to the Chinese ambassador to the Philippines “outrage, condemnation and protest” over the incident.

At the time of publication, China’s foreign ministry had not released a statement on the incident.

No injuries have been reported from the incident.

Prior to the incident, the Philippine government had previously lodged a diplomatic protest against China’s repeated disruptive acts toward Philippine authorities patrolling the South China Sea.

The Filipino Department of Foreign Affairs (DFA) claimed that its protest resulted from the “unlawful issuance of over 200 radio challenges, sounding of sirens, and blowing of horns by Chinese government vessels.”

The Permanent Court of Arbitration at The Hague dismissed Beijing’s claims to much of the South China Sea in 2016, in favour of the Philippines and other nations in the region. It ruled that China’s claims had no legal basis.

However, the verdict has had little impact on China’s behaviour, with Beijing refusing to abide by it. The resulting territorial disputes are ongoing, with Beijing continuing to pursue its claims to vast swathes of the sea based on its so-called “nine-dash line,” which includes the reef.

Brunei, Malaysia, the Philippines, Taiwan, and Vietnam all having competing claims to China.

The office of President Rodrigo Duterte said it was aware of the incident at the shoal.

“We will continue to assert our sovereignty, sovereign rights, and jurisdiction,” acting spokesperson Karlo Nograles said.

Before the incident, National Security Adviser Hermogenes Esperon said authorities had noticed an unusual presence of Chinese maritime militia near the atoll and Philippine-occupied Thitu island. China has denied operating a militia.

There were 19 vessels near Second Thomas Shoal last week, and 45 near Thitu Island, Esperon told reporters, describing those as “very aggressive.”