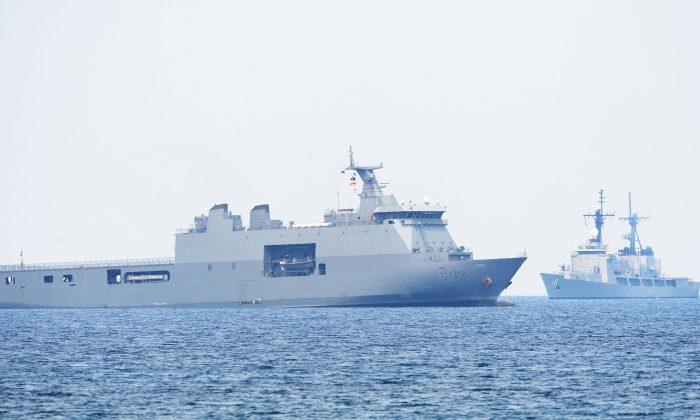 MANILA—The Philippines has filed a diplomatic protest over the presence of more than 200 Chinese boats near an island occupied by Manila in the disputed South China Sea, the president’s spokesman said on April 1.

President Rodrigo Duterte has pursued warmer ties with Beijing since taking office in 2016 in exchange for billions of dollars of pledged loans and investment.

The Department of Foreign Affairs protested against the vessels near the Philippines-occupied Thitu island, presidential spokesman Salvador Panelo told a regular news conference, without describing the boats. The Chinese ambassador said they were fishing boats.

“The mere fact that they are there and just staying there for a week, why, what are they doing there?” Panelo said. It was unclear when and where the Philippines filed the protest.

The Philippines, China, Vietnam, Taiwan, Brunei and Malaysia have competing claims of sovereignty in the waterway, a conduit for in excess of $3.4 trillion of goods.

Lights from hundreds of buildings in China’s sprawling artificial islands can be seen at night from Thitu.

Both Chinese and Filipino fishermen are present in the contested waters, Zhao Jianhua, China’s ambassador to the Philippines, told reporters. He denied media reports that Chinese fishermen were carrying firearms.

The announcement of the diplomatic protest came as the Philippines and United States, a treaty ally, kicked off an annual joint military exercise involving roughly 7,500 troops, including 50 from Australia.

They are aimed at enhancing response to natural disasters.

Last month, U.S. Secretary of State Mike Pompeo assured the Philippines it would come to its defense if it came under attack in the South China Sea.

The Philippines gained independence from the United States in 1946. Although there is no longer a permanent U.S. military presence in the Philippines, joint exercises, intelligence exchanges and transfers of hardware take place regularly under various agreements.