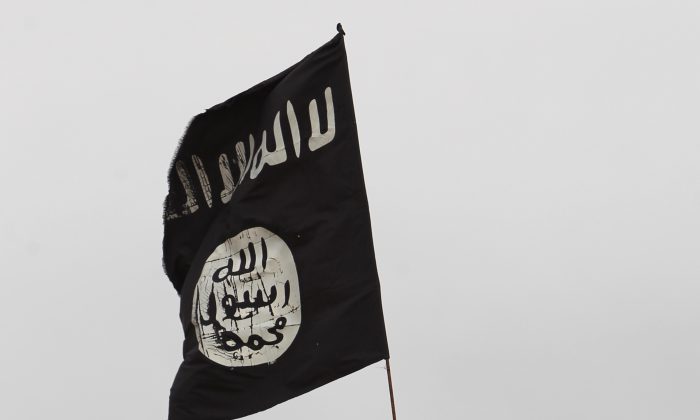 FILE PHOTO: Iraqi Shiite fighters from the Popular Mobilization units take off an Islamic State flag from an electricity pole on March 3, 2016, during an operation in the desert of Samarra aimed at retaking areas from ISIS jihadists. (Ahmad al-Rubaye/AFP/Getty Images)
Asia & Pacific

MANILA—Philippine security forces on Sunday arrested the Indonesian wife of the slain pro-ISIS terrorist leader who planned and led the attack on Marawi City, authorities said.

President Rodrigo Duterte declared last month the liberation of Marawi City from the Maute group, a pro-ISIS terrorist group which held the lakeside town after the death of two top leaders, including the woman’s husband Omarkhayam.

The army announced the termination of combat operations a week later, ending a five-month battle that killed more than 1,100 people, including 165 soldiers. Close to 400,000 people were also displaced as fighting destroyed the city.

National Police Chief Ronald dela Rosa said bomb-making materials were seized from Minhati Madrais, who was with her six children when security forces raided her home in Iligan City.

“Her children, who are all minors, will be turned over to the social welfare department,” he said, adding that rebellion and illegal possession of explosive devices charges were now being prepared against her.

He said Madrais, alias Baby, was among more than 100 people ordered arrested by Defence Secretary Delfin Lorenzana after martial law was declared by Duterte on May 23. Madrais’ passport is also expired, another violation of Philippine laws, he added.

“We are still hunting down stragglers,” he said, adding there could be as many as 39 terrorists hiding in the ruined city based on information from captured Indonesian terrorists.

“We do not have information how many terrorists are still there. But, we will hunt them down.”

The new army commander, Lieutenant-General Rey Leonardo Guerrero, said he would work closely with Indonesia and Malaysia to step up coordinated sea and air patrols along the borders where kidnappings and attacks on shipping are happening.

“We intend to increase the frequency of our coordinated patrols with our ASEAN neighbors to stop piracy and terrorist attacks in these dangerous seas,” he said.