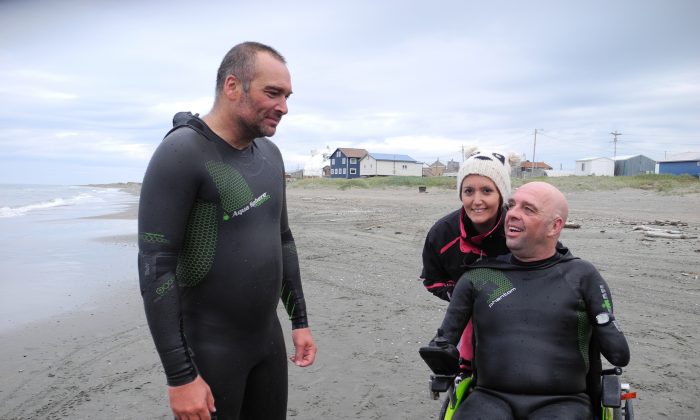 Philippe Croizon lost all four limbs in an electrical accident in 1994. A ladder he was standing on touched a power line. Nonetheless, Croizon has made headlines with the daunting feats of swimming the English Channel and the Bering Strait.

On Thursday night, he suffered a hit to his independence, as he described it.

While on holiday in Dieppe, northern France, a trailer containing his all-terrain specialty wheelchair was stolen.

“I don’t know if these people realize what they did,” he told the BBC. “Without it, I am nothing.”

“They haven’t just stolen my wheelchair, they’ve stolen my independence,” the BBC quotes him as having told French media.

Croizon pleaded for the return of his wheelchair, saying it would be very expensive to replace and that friends had helped him pay for it.

When he swam the English Channel in 2010, he said, “You only need to want [something], and then it becomes possible to go beyond your limits.” He described his reaction upon arriving at his destination in France at that time, “I broke down in tears … it [was] pure happiness.”

When he swam the Bering Strait between Alaska and Russia in 2012, he said the icy waters made it the “hardest swim of my life,” reported AFP at that time. He was aided by prosthetics similar to paddles.

He told RFI after his 2012 swim, “Everything is possible, everything can be done when you have the will to go beyond yourself.”