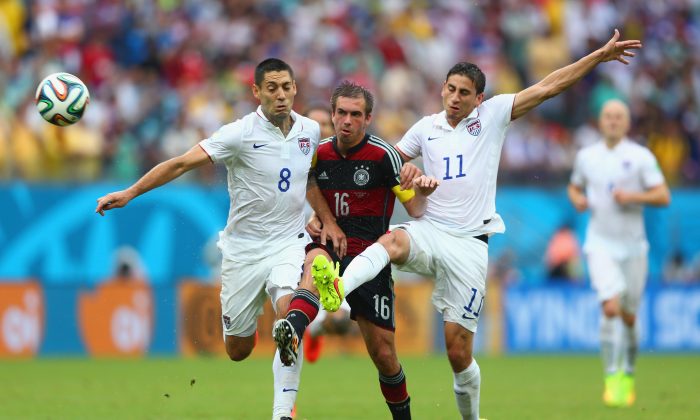 Philipp Lahm of Germany is challenged by Clint Dempsey (L) and Alejandro Bedoya of the United States during the 2014 FIFA World Cup Brazil group G match between the United States and Germany at Arena Pernambuco on June 26, 2014 in Recife, Brazil. (Michael Steele/Getty Images)
Soccer

Michael Ballack has spoken out against Joachim Loew’s decision to play Philipp Lahm in midfield.

Writing in a column for the Express before Germany’s match against the United States, Ballack, a former German international and footballing super star, said: “Don’t get me wrong, he is a super player — but he is needed in the back four in the national team.”

“He is much more valuable there. He’s played there for years, and has turned into a world class player.”

Restoring the German captain to either full back position would also free up a midfield slot for Bastian Schweinsteiger.

The Bayern Munich man was injured before Germany’s opening match against Portugal, and since returning to fitness, the long-time German international has found himself sitting on the bench instead of dictating midfield matters on the pitch against Ghana.

“Why should we, by free choice, rob ourselves of Lahm in a position the whole world envies us for?” Ballack questioned.

“We only weaken ourselves.”

“Moreover, Lahm takes away a place on the pitch for another world class player. And that’s Bastian Schweinsteiger for me.”

Ballack speculates that Lahm “would not like to return to the back four” because of age.

“He’s 30 now, and knows that it will get more and more difficult to meet the challenges of the hard-running full back position,” said the former German captain.

However, as Philipp Lahm excelled in the USA-Germany game along side Schweinsteiger and Toni Kroos, it would be difficult for coach Loew to return Lahm to full back and risk disrupting his well-oiled midfield.