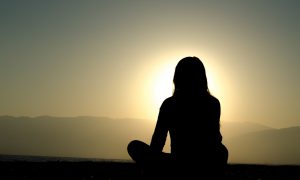 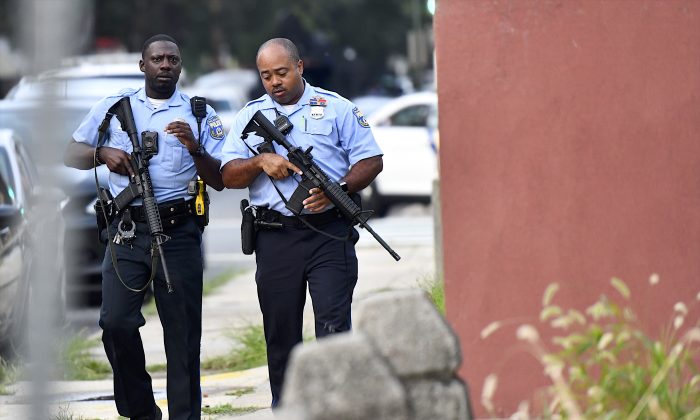 A man who opened fire on Philadelphia police on Aug. 14, wounding six officers and triggering an hourslong standoff, was a convicted felon who wasn’t legally allowed to possess a firearm.

The shooter, who has been identified in media reports as 36-year-old Maurice Hill, was first arrested at the age of 18 for possessing a gun with an altered serial number, according to public records (pdf). He has since been arrested nine more times, including six arrests that involved illegal possession of guns.

Responding to the shooting incident, President Donald Trump lamented the fact that the assailant was allowed to walk the streets freely given his extensive criminal record.

“The Philadelphia shooter should never have been allowed to be on the streets,” Trump said in an Aug. 15 tweet.

“He had a long and very dangerous criminal record. Looked like he was having a good time after his capture, and after wounding so many police.

“Long sentence – must get much tougher on street crime!”

The Philadelphia shooter should never have been allowed to be on the streets. He had a long and very dangerous criminal record. Looked like he was having a good time after his capture, and after wounding so many police. Long sentence – must get much tougher on street crime!

Officials didn’t formally identify Hill as the suspect, but his lawyer has identified him in various media interviews. Hill was reportedly armed with a semi-automatic rifle and several handguns and had barricaded himself inside a home, according to media reports.

Amid the standoff, video footage from witnesses also appeared to depict onlookers taunting and throwing things at officers responding to the shooting.

The shooting began when officers went to a home in a north Philadelphia neighborhood around 4:30 p.m. to serve a narcotics warrant, in an operation “that went awry almost immediately” as the suspect opened fire, Philadelphia Police Commissioner Richard Ross said.

Many officers “had to escape through windows and doors to get (away) from a barrage of bullets,” Ross said.

About five hours into the standoff, police started to move in, with the suspect later surrendering with his hands held high in the air, local news broadcasts showed. Authorities said he was taken into custody.

Shaka Johnson, Hill’s lawyer, told CBS Philly that the motive behind the shooting was unclear, adding that he had no knowledge of whether Hill was the target of the warrant.

Two other officers were trapped inside the house for about five hours after the shooting broke out, but were freed by a SWAT team well after darkness fell. Three people, whom officers had taken into custody in the house before the shooting, were also safely evacuated.

“It’s nothing short of a miracle that we don’t have multiple officers killed today,” Ross said. All six wounded officers have been released from the hospital.

In an address to the nation earlier this month, Trump proposed a series of actions to combat mass shootings, including reforming mental health laws and reinstating the death penalty for those who commit hate crimes and mass murders.

CBS Philly reporter Alexandria Hoff described the taunting and harassment she saw as she attempted to shoot a live news piece on the scene.

“I mentioned this at 10, and since I was harassed during that live shot, I’ll mention it here, too,” Hoff said. “A major moment of disappointment this evening was watching a crowd of people taunt police officers, laughing and yelling at them in the midst of the gunfire.”

She added that most of the onlookers at the scene remained respectful and concerned, but she described the jeering from some as “such a startling thing to see in the middle of something so chaotic.”

I mentioned this at 10 and since I was harassed during that live shot, I’ll mention it here too. A major moment of disappointment this evening was watching a crowd of people taunt police officers, laughing and yelling at them in the midst of the gunfire. #PhiladelphiaShooting

More footage of the crowd being unruly and confronting the officers was posted by Breaking911.com. Some onlookers were seen yelling at and pushing officers as they walked through the crowd.

“What is going on in Philadelphia explains how dangerous it is to be a police officer,” he said on Aug. 14. “Our prayers are with them, all the wounded and the ones still engaged. Attacking police officers is an attack on our decent and lawful society.”

Heather Mac Donald, conservative commentator and author of the 2016 book “The War on Cops,” called the harassment of the officers a “part of an ongoing delegitimization of law enforcement.”

She pointed to recent comments by Sens. Elizabeth Warren (D-Mass.) and Kamala Harris (D-Calif.), both presidential candidates, who called the 2014 police killing of Michael Brown in Ferguson, Missouri, a murder. Multiple investigations, including by the Justice Department under President Barack Obama, cleared the responsible officer, Darren Wilson, of wrongdoing.

“The false attacks on policing continue, and that trickles down to the streets. I’ve been hearing from officers for several years now about the ugly, ugly hostility that they get when they’re going about their ordinary duties,” Mac Donald told The Epoch Times.

There’s now a “national phenomenon,” she said, where police officers are “routinely surrounded” and harassed when they get out of their cars.