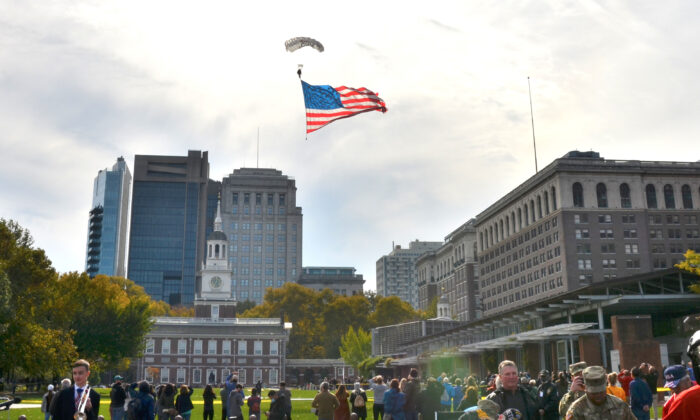 Two paratroopers jumped from a small airplane circling above Independence Mall, one of them holding a big American flag. They landed on the lawn next to the Liberty Bell during the 7th Annual Veterans Parade and Festival in Philadelphia, Pa., on Nov. 7, 2021. (Frank Liang/The Epoch Times)
Regional News

PHILADELPHIA—Philadelphians celebrated the city’s 7th Annual Veterans Parade and Festival to honor the brave men and women who have served in this nation’s armed forces.

It was clear and sunny on Nov. 7, 2021, as the streets of downtown Philadelphia were lined with crowds of veterans, their family members, and thousands of their supporters, many proudly waving American flags.

There were more than 150 organizations involving over 7,000 participants and 30 veteran service organizations, according to the website of the event organization, Philly Vet Parade.

The city’s Veterans Parade started in 2015, according to Bob McMahon, one of the event organizers who is also the mayor of Media, Pennsylvania, and a Vietnam War veteran.

“We’ve been doing [Veterans Parade] in Media for 61 years. So, we’re experienced, and we wanted to do it here,” McMahon told The Epoch Times. “We want people to understand we all serve and emphasize that everyone is patriotic.”

The celebration at Independence Mall started with a veteran singing the National Anthem. Following the final melodies of the song, two paratroopers jumped from a small airplane circling above, one of them holding a big American flag. They landed on the lawn next to the Liberty Bell.

Colorful floats, cars flying the American flag, and marching bands started at Juniper and Market Streets with a brigade of over 250 motorcyclists, then continued heading east on Market Street, concluding at North Fifth Street, where the Veterans Festival took place.

The parade was full of excitement and patriotism.

“Great to see a lot of people out here supporting veterans,” Iraq War veteran Mike Tomolonis told The Epoch Times, who is the eighth generation in his family that served in the military.

“It’s an honor to serve our country. I feel that everyone should serve in the military because it teaches you responsibility, it teaches you leadership and what it means to be an American.”

Veterans also brought heroic stories to the event, which they thought needed to be told. One of them was veteran Robert Toporek, the author of the book “Milton L. Olive III: The First African American Awarded the Medal of Honor in the Vietnam War.”

Private First Class Olive was in Toporek’s squad during Vietnam War. One day when Olive and four other U.S. soldiers pursued the enemy through a jungle, a grenade was thrown into their midst. Olive saw the grenade and saved the lives of his fellow soldiers by falling onto the grenade and absorbing the blast with his body.

“I didn’t talk about Vietnam for 25 years. And then I called his [Olive’s] father and I promised him that I would make it a national story since I’m not dead,” Toporek told The Epoch Times.

“I just published it as a book; we have a website MiltonOlive.org. And we’re here at the veterans’ event to share the story,” he said.

He said veterans’ stories need to be told because “a very small portion of the population ever become veterans, and an even smaller portion actually see major combat.”

Last year’s celebration was held virtually due to the pandemic. This year, attendees said it was great to be back in person.

Christina Whitney, an Iraq War veteran’s wife, held a banner of “Welcome Home From Your Tour” with her daughter and son to greet the parade.

“I’m very happy that at least it’s in person. And it seems like there’s a lot of energy. And I love how everybody has a flag here. And they’re waving it and cheering for all our troops,” Whitney told The Epoch Times.

Whitney brought her kids to “honor their father and honor all the men and women that fought for our country.”

She said, “I think it’s important for them to be here.”

John McNutt, a musician and founder of the John McNutt Band, also felt it was important to support veterans because “it takes lots of courage to do what they were doing.” He said, as an artist and musician, he had “respect to our military” and “wants to give back.”