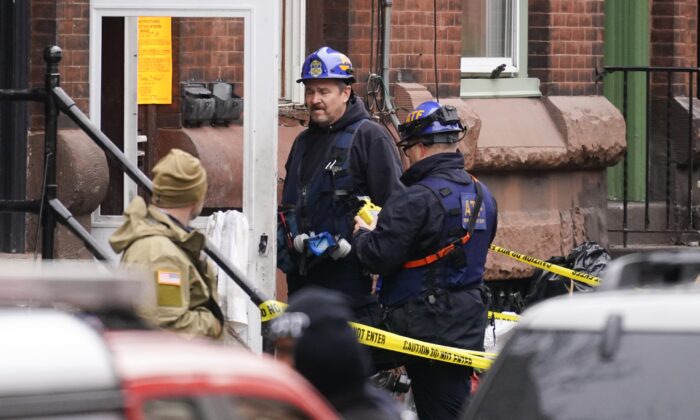 Investigators gather near the entrance to the building of Wednesday's fatal fire in the Fairmount neighborhood of Philadelphia, on Jan. 6, 2022. (Matt Rourke/AP Photo)
US News

A Christmas tree that was set on fire caused a blaze in a Philadelphia row house that killed a dozen people, including eight children, last week, the city’s top fire official said Tuesday, citing preliminary findings of an investigation.

Philadelphia Fire Commissioner Adam Thiel, detailing early results from the probe, said seven smoke alarms were found in the building but only one of them sounded as the fire spread.

“We believe with certainty, so 99 to 100 percent confidence, that the first item ignited in this blaze was a Christmas tree” on the second floor of the home, Thiel said at a news conference, adding that a lighter was found nearby.

A five-year-old, who is one of just two survivors, was the only person on the second floor at the time the tree was ignited, he added.

The fire department classified the fire as ‘incendiary’, saying it believed “there was some type of human intervention to bring the ignition source to the first item ignited”.

The fire broke out around 6:30 a.m. (1130 GMT) on Wednesday on the second floor of a three-story row house in the city’s Fairmont neighborhood. The building is owned by the federally funded Philadelphia Housing Authority, the fourth-largest housing authority in the United States.

The catastrophe—along with a fire in New York City on Sunday that claimed the lives of 17 people, including eight children—has stirred questions on safety standards in low-income city housing in the United States.

Philadelphia fire officials said the building was overcrowded, with about two dozen people inside a structure meant to accommodate two families.

Conflicting accounts emerged about the building’s smoke detectors. Fire department officials said four smoke detectors were installed in the building and had last been inspected in 2020. Dinesh Indala, executive vice president at the Philadelphia Housing Authority, told reporters there were six devices last inspected in May 2021.

By Kanishka Singh and Tyler Clifford