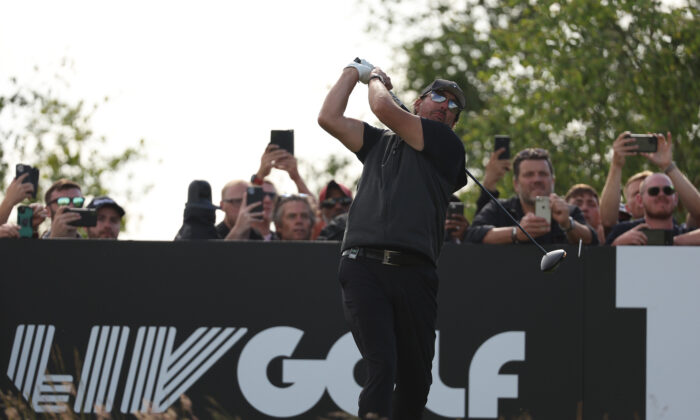 ST ALBANS, ENGLAND - JUNE 11: Phil Mickelson of the United States tees off on the 16th hole during day three of the LIV Golf Invitational at The Centurion Club on June 11, 2022 in St Albans, England. (Photo by Matthew Lewis/Getty Images)
Golf

WASHINGTON—Hall of Fame golfer Phil Mickelson and 10 other players filed a lawsuit against the PGA Tour on Wednesday, alleging that it broke anti-trust law by refusing them to participate on the tour and the new rival LIV Golf circuit, backed by Saudi Arabia.

“As part of its carefully orchestrated plan to defeat competition, the Tour has threatened lifetime bans on players who play in even a single LIV Golf event,” the golfers said in the complaint.

They asked the court to declare the punishments illegal and to award damages and attorneys fees.

In a letter to players, the PGA Tour acknowledged that the 11 had been suspended and indicated that the Tour was not inclined to back down.

“These suspended players–who are now Saudi Golf League employees–have walked away from the TOUR and now want back in,” Commissioner Jay Monahan wrote in a letter to members. “We intend to make our case clearly and vigorously.”

In July, news broke that the U.S. Justice Department was investigating whether the PGA Tour broke anti-trust law in fending off the LIV Golf circuit.

The $255 million LIV series is being bankrolled by Saudi Arabia’s Public Investment Fund (PIF), which critics say is a vehicle for the country to improve its image in the face of criticism of its human rights record.

By Diane Bartz and Frank Pingue