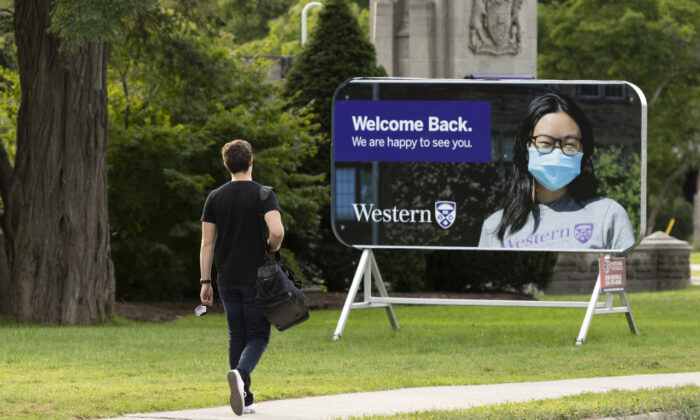 Jason Falbo said he has made the difficult decision to withdraw from his doctorate program at Western University following nearly seven years of study after the university announced a COVID-19 vaccine policy that mandates three shots for all staff and students.

Falbo, who has been studying electronics and communications engineering at Western University since 2015, said he found the policy “completely unacceptable” and decided to take action to protest against it. He said he would have graduated after submitting and defending his final thesis, but by dropping out of the doctorate program, he hopes to raise awareness of the difficult position that the policy has put students in.

“I didn’t take the decision lightly,” he told The Epoch Times in an interview on Aug. 29. “But I knew that my platform would probably be more powerful in telling the administration what I had learned about the general student body’s reaction to these mandates.”

“This is not an education issue or an issue for university administration. It’s completely disconnected from the goal of Western and what the university should be doing—the goal which is to provide a high level of education for students.”

In particular, Falbo pointed to the undergraduate students and those who have just enrolled at Western and are about to start their fall semester in just over a week’s time.

“That is very difficult to change course at the last minute,” he said. “Despite the fact that many people did go through with the vaccinations, they probably did it solely because they had to and not necessarily because they wanted to.”

On Aug. 27, hundreds of students gathered for a rally on the university’s campus in protest of its vaccine policy. James Donald, one of the students at the rally, questioned the timing of the policy’s announcement, which came after some students had already paid the first tuition instalment.

Falbo, who is vice president of engineering for the Toronto-based Mircom Group of Companies, said he is also a donor to Western University and an alumnus of its bachelor program—identities that exempt him from the vaccine policy, when he would otherwise have to comply as a current student.

“There’s multiple areas where I would qualify for an exemption because … I’m both alumni and a donor, but I’m also a current student, so it just goes to show how haphazardly the policy was put together, and how again, it unfairly discriminates against people.”

Now I’m confused. How do I submit my eligibility to attend campus?

Western has provided a list of the categories of visitors to the university who are exempt from its COVID-19 vaccine policy, including visiting alumni, donors, and prospect donors.

The Epoch Times reached out to Western University for comment but didn’t hear back by publication time.

The vaccine policy released on Aug. 22 makes Western the only university in Canada to mandate booster shots for all staff and students on campus.

While some other institutions, like the University of Toronto and Trent University, have mandated vaccination for those living in residence, most universities in Ontario have not imposed either vaccine or mask mandates for the fall semester. The province has lifted proof of vaccination requirements in public spaces.

Falbo has written an email to the university leadership to express his disappointment with the vaccine policy, which he said discriminates against unvaccinated people and violates their rights to education.

“We cannot forego basic human rights whereby, in my humble opinion, the mandate is unjustifiably discriminatory in blocking access to education for those who disagree with the vaccine mandate,” he wrote.

“I feel obligated to exercise my right to choose, and I presently choose not to support [an] institution that blocks access to education for those who are concerned about being coerced into making a decision that creates significant personal stress solely to have the opportunity to continue with their education.”

However, Falbo said he was “not at all pleased” with the response from the university, which he said had simply directed him to the webpage to voluntarily withdraw from his doctorate program.

“[There was] no conversation, no communication, no negotiation,” Falbo said.

“Western needs to listen to what’s being said, and they have to preserve the rights [to] education.”