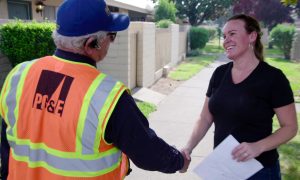 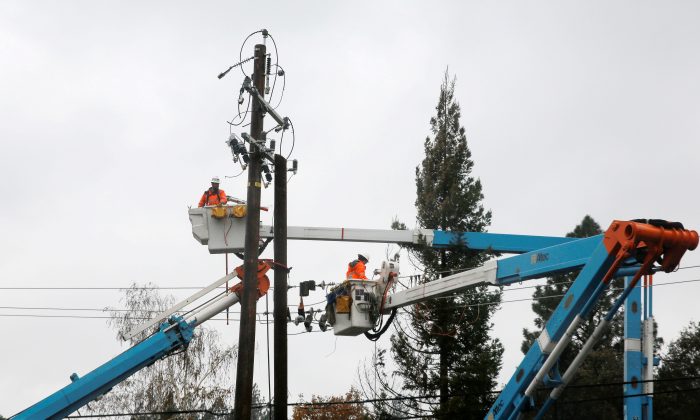 PG&E crew work on power lines to repair damage caused by the Camp Fire in Paradise, Calif., on Nov. 21, 2018. (Elijah Nouvelage/Reuters)
US News

PG&E Corp said last week it has reached an $11 billion settlement to resolve most claims by insurance carriers related to 2017 and 2018 wildfires in California.

It is the second major settlement of wildfire claims by PG&E, and requires approval by the federal bankruptcy judge overseeing the utility’s Chapter 11 case.

PG&E said proceedings on the third and final major group of wildfire claims remain pending in federal and state courts.

It said the latest settlement is related to payments made by insurers to individuals and businesses with coverage for wildfire damage.

Representatives of holders of 85% of so-called subrogation claims said the latest accord does not fully satisfy its $20 billion in claims, but would “pave the way for a plan of reorganization that allows PG&E to fairly compensate all victims and emerge from Chapter 11 by the June 2020 legislative deadline.”

Subrogation allows insurers that pay policyholders for insured losses to recoup sums from third parties they deem responsible for them.

The company has unveiled the outlines of a reorganization plan that would pay $17.9 billion for claims stemming from the wildfires that led to its bankruptcy in January.

At the time of its Chapter 11 filing, PG&E projected more than $30 billion in liabilities from wildfires, including last year’s Camp Fire, the deadliest and most destructive wildfire of California’s modern history.

The plan filed in the U.S. Bankruptcy Court in San Francisco includes up to $8.4 billion for wildfire victims, payments capped at $8.5 billion for reimbursing insurers, and the $1 billion settlement with local governments.

Last week, a lawyer representing wildfire victims called the $8.4 billion cap “totally unacceptable” because government agencies could have billions of dollars in claims, leaving far less than $8.4 billion for victims.