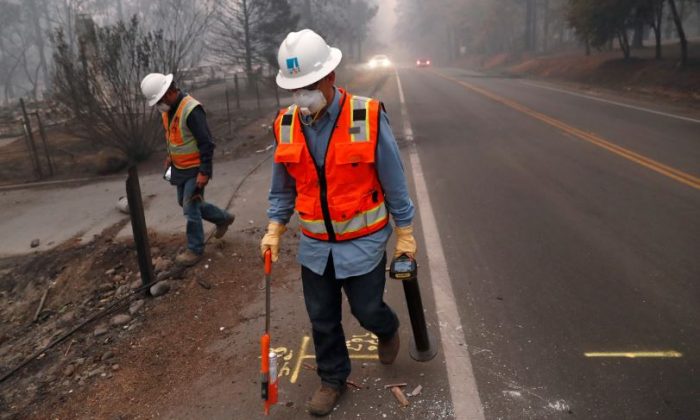 PG&E Reports Another Outage on Morning When California Fire Started

NEW YORK—California utility PG&E Corp., facing investor concerns over its possible role in the deadly Camp Fire in Northern California, has reported another power-line outage that it experienced on the morning of Nov. 8 when the blaze started.

The incident report, which was filed on Nov. 16 with the safety division of the California Public Utilities Commission (CPUC), said a line near the area of Concow in Butte County suffered an outage at 6:45 a.m. PST (9:45 a.m. EST) on Nov. 8.

The information in the report is preliminary, according to a spokesman for PG&E, who said the company was cooperating with any investigations.

The utility has said it could face liability that exceeds its insurance coverage if its equipment were found to have caused the Camp Fire.

The cause of the blaze, which was 60 percent contained on Nov. 18, is under investigation. In a previous regulatory report, PG&E, which operates in the northern part of California, said it experienced an outage on a transmission line on the morning of Nov. 8 near the town of Pulga, near where the fire is thought to have started.

Authorities were still searching for signs of the 1,276 people listed as missing after the Camp Fire tore through the mountain town of Paradise. The remains of 76 people have been recovered so far in what is considered the state’s deadliest-ever wildfire.

A CPUC spokesman confirmed that the agency received the second report on Nov. 16, and said the incident would be incorporated into its investigation “to assess the compliance of electric facilities with applicable rules and regulations in fire impacted areas.”

Investors are watching for clues about whether California’s government will step in to save PG&E should it eventually be found responsible for the fire and should any potential liability exceed the utility’s resources.

The company’s stock had slumped more than 60 percent since the wildfire broke out, on fears that without help from California’s government, the utility could go bankrupt should it eventually be found responsible.