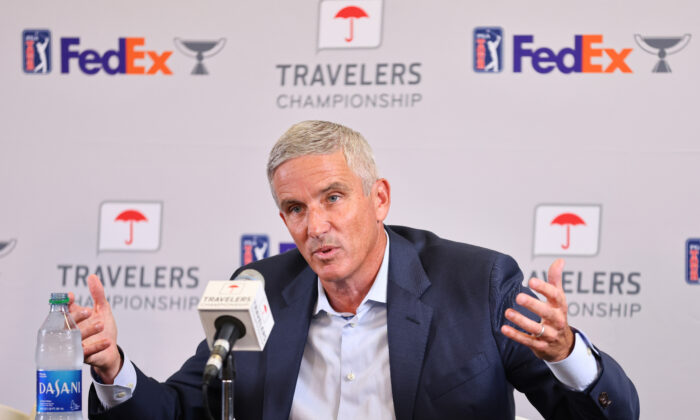 PGA Tour Commissioner Jay Monahan revealed changes made to the PGA Tour to counter the “arms race” from the Saudi-backed LIV Golf series, in cooperation with the PGA Policy Board and Player Directors, at a press conference prior to the Travelers Championship at TPC River Highlands on Wednesday, in Cromwell, Conn.

“If this is an arms race and if the only weapons here are dollar bills, the PGA Tour can’t compete,” said Monahan. “The PGA Tour, an American institution, can’t compete with a foreign monarchy that is spending billions of dollars in attempt to buy the game of golf.”

Brooks Koepka is the latest to sign with LIV Golf to compete at next week’s event in Oregon, along with rival Bryson DeChambeau.

LIV has given enormous signing bonuses, aside from the $25 million total in prize money at each event, reportedly $200 million to Phil Mickelson and $125 million to Dustin Johnson.

“We welcome good, healthy competition. The LIV Saudi golf league is not that,” added Monahan. “It’s an irrational threat, one not concerned with the return on investment or true growth of the game.”

Monahan revealed that the PGA Tour will increase its prize money, which was planned in 2020 and now confirmed due to the influence of LIV Golf.

Beginning in 2024, the schedule has been refined to include seven tournaments with purses of $20 million, with fewer spots for post-season play at the FedEx Cup Playoffs—from 125 to 70. There will also be up to three no-cut, limited-field international events.

“While different than it’s been in the past, I think it’s going to be very exciting for fans and I think will create great energy in the fall,” said Monahan.

Those outside of the top 70 will compete to maintain their tour cards, with an opportunity to reach the top 50, along with qualification in the $20 million events.

“If you’re good enough, you will rise to the top,” stated Monahan. “And if you don’t continue to earn that top spot, someone else as hungry and as talented is right there to take your place. Again, that’s the unique beauty of what the tour has and always will offer to fans.”

The Policy Board also amended the Resource Allocation Plan to increase the purses at these eight events in 2023:

“There is more work to be done and details to confirm,” added Monahan. “But implementing substantial changes to our schedule gives us the best opportunity to not only drive earnings to our players, but also improve our product and create a platform for continued growth in the future.”

Rory McIlroy spent five hours Monday in a board meeting as one of four player directors on the PGA Tour Policy Board. Heconfirmed that the new schedule is “important for the future of the [PGA] Tour.”

“You’re going to have tournaments that guys love to play, and they’re going to come back and keep playing them,” said McIlroy.

“On the PGA Tour, our members compete for the opportunity to add their names to history books, and, yes, significant financial benefits, without having to wrestle with any sort of moral ambiguity,” continued Monahan. “And pure competition creates relevancy and context, which is what fans need and expect in order to invest their time in a sport and in a player.

“That’s the beauty of the PGA Tour,” Monahan concluded. “We have and always will provide a global platform for members to compete against the very best, earn their stardom, and become household names.”