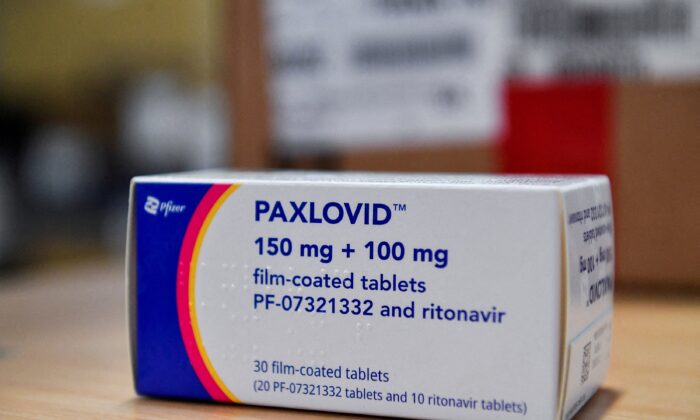 A new study has found that Pfizer’s COVID-19 oral antiviral pill Paxlovid appears to provide little or no benefit for younger adults.

Researchers in the Israel-based study, which was published in the New England Journal of Medicine on Wednesday, examined over 109,000 patients between Jan. 9 and March 31 of this year.

During the study period, the omicron variant was the dominant strain in Israel.

Pfizer’s Paxlovid pill consists of two different antiviral drugs—nirmatrelvir and ritonavir. It is taken twice per day for five days and is best within five days of symptoms onset.

The pill is currently authorized for conditional or emergency use in more than 60 countries to treat COVID-19 patients who are at high risk of severe illness due to conditions like obesity, diabetes, and heart disease.

However, people between the ages of 40 and 64 who were at high risk saw no measurable benefit, according to the analysis of medical records.

The patients were given the drug shortly after infection.

Paxlovid has become the CDC’s recommended outpatient treatment for COVID-19 and President Joe Biden’s administration has spent more than $10 billion purchasing the drug and making it available at thousands of pharmacies across the country through its test-to-treat initiative.

Authorization of the drug was based on final results from Pfizer’s Epic-HR study, which showed that a treatment course of one dose every 12 hours for five days reduced the rate of hospitalization due to COVID-19 or death by nearly 90 percent in patients treated within three days of symptom onset.

Pfizer expects Paxlovid to bring in more than $20 billion this year.

“Our study suggests that during the omicron surge, the rates of hospitalization and death due to COVID-19 were significantly lower among adults 65 years of age or older who had received treatment with nirmatrelvir than among younger adults who had received such treatment, regardless of whether a patient had previous SARS-CoV-2 immunity,” researchers wrote.

“However, no evidence of benefit was found in younger adults,” they added.

The study has been peer-reviewed but notes several limitations.

“Our study showed that only a minority of patients who were identified as high risk and eligible for nirmatrelvir therapy received the antiviral therapy,” researchers wrote. “We do not know why the other eligible patients did not receive treatment, and there may be some selection mechanism that is not explained by the observed confounders; therefore, this observation remains our primary concern regarding residual bias.”

The study also relied on data compiled from a large Israeli health system rather than enrolling patients in a randomized study with a control group.

It comes after the Centers for Disease Control and Prevention (CDC) in June issued an alert to health care providers that the drug can cause “COVID rebound” symptoms.

“Paxlovid continues to be recommended for early-stage treatment of mild to moderate COVID-19 among persons at high risk for progression to severe disease,” the agency said in the notice. It added that “COVID-19 rebound has been reported to occur between 2 and 8 days after initial recovery and is characterized by a recurrence of COVID-19 symptoms.”

The White House on Thursday touted the benefits of the pill.

“Risk for severe outcomes from COVID is along a gradient, and the growing body of evidence is showing that individuals between the ages of 50 and 64 can also benefit from Paxlovid,” White House assistant Press Secretary Kevin Munoz said in an emailed statement to the Associated Press.

However, Walid Gellad, director of the University of Pittsburgh’s Center for Pharmaceutical Policy and Prescribing, told Endpoints News that more information from clinical trials of the drug needs to be published.

“The government is pushing this drug too hard to be used at the drop of a hat in everyone without enough evidence that it has sufficient benefit to outweigh known and unknown risks, including the continued uncertainty around rebound and the theoretical risks of resistance,” Gellad said. “What we really need is a randomized trial in vaccinated younger people, which the British will eventually give us, because FDA did not require it here.”