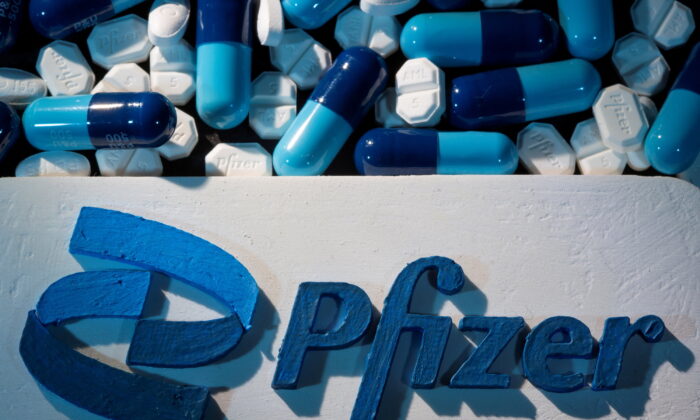 A 3D printed Pfizer logo is placed near medicines from the same manufacturer in this illustration taken on Sept. 29, 2021. (Dado Ruvic/Reuters)
Companies

Pfizer Inc. announced on May 25 that it will provide all of its current and future patent-protected drugs and vaccines on a not-for-profit basis to 1.2 billion people in 45 lower-income countries.

The pharmaceutical and biotechnology company said in a press release that the plan is part of “An Accord for a Healthier World,” launched with the aim to address health inequities between many lower-income countries and the rest of the world.

The 23 drugs and vaccines to be made available to the lower-income countries help treat and prevent a range of infectious diseases including COVID-19, pneumonia, and meningitis. They also help to treat certain cancers, including types of leukemia, breast cancer, and advanced kidney cancer, and help to manage inflammatory and rare diseases.

These drugs are already available in the United States and Europe but will be sold to poorer nations at the cost of manufacturing along with minimum distribution costs.

As Pfizer launches new medicines and vaccines, those products will also be provided to the lower-income countries that are part of the accord.

“As we learned in the global COVID-19 vaccine rollout, supply is only the first step to helping patients. We will work closely with global health leaders to make improvements in diagnosis, education, infrastructure, storage and more,” said Pfizer Chairman and CEO Albert Bourla. “Only when all the obstacles are overcome can we end healthcare inequities and deliver for all patients.”

The company will initially work with healthcare officials in five countries: Rwanda, Ghana, Malawi, Senegal, and Uganda, to “identify early insights and opportunities to ensure all medicines and vaccines can reach those in need,” including bringing in experts to support diagnosis, health care professional education, and training, as well as tackling issues regarding supply chain management and other infrastructure enhancements.

Work in these five countries will then be applied to help support the rollout of the initiative in the remaining forty countries, Pfizer said.

Pfizer also plans to work with accord participants to help reduce the amount of time it takes to make new medicines and vaccines available in these countries.

The pharmaceutical giant noted that a lack of access to these medicines and vaccines in poorer nations leads to the deaths of nearly one million people each year and increases the risk of chronic diseases that significantly impact the quality of life for at least half a million more.

Pfizer is also using funding from the Bill & Melinda Gates Foundation to advance work on a vaccine against Group B Streptococcus (GBS), the leading cause of stillbirths and newborn mortality in low-income countries.

They are also in talks to support Respiratory Syncytial Virus (RSV) vaccine development, another maternal vaccine.

Bill Gates noted that “everyone, no matter where they live, should have the same access to innovative, life-saving drugs and vaccines” while touting the accord for potentially helping millions of people in low-income countries live healthier lives.

“Pfizer is setting an example for other companies to follow,” Gates said.

Pfizer’s COVID-19 vaccine generated income of nearly $37 billion in sales for 2021. However, the company has sold its vaccine in lower-income countries for about $6.75 per dose compared to the European Union and the United States, which pay about $19 per dose, Reuters reports.

However, the drug manufacturer has come under scrutiny in recent months over injuries and deaths associated with its COVID-19 vaccine, which is built on messenger RNA technology.

Researchers at the Centers for Disease Control and Prevention revealed on May 19 that a young boy had died after getting Pfizer’s COVID-19 shot, with evidence showing that he suffered heart inflammation, a side effect that health officials have acknowledged can happen in rare cases following vaccination.

Two unnamed teenage boys were previously determined to have died shortly after getting the Pfizer vaccine, with autopsies conducted by medical examiners indicating that heart inflammation was the primary cause of death.

Pfizer has also come under for fire for requesting a 75-year deadline to release documents from their clinical trials of the vaccine to the public.

The company was later forced to release the documents after a group called Public Health and Medical Professionals for Transparency filed a Freedom of Information Act request with the U.S. Food and Drug Administration to obtain the documentation used to approve the shot.

In January 2022, a judge in Fort Worth, Texas, ordered the FDA to release 55,000 pages of the documents each month until they are all released, which was expected to take about eight months.