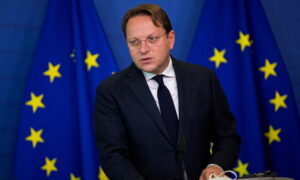 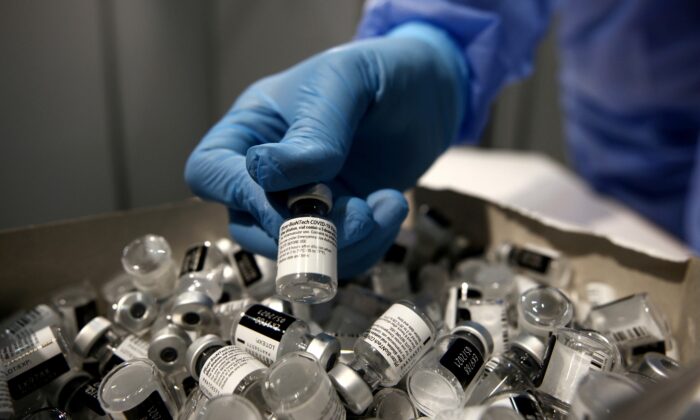 A nurse puts a used Pfizer-BioNTech COVID-19 vaccine vial in a disposal box with empty vials at Messe Wien Congress Center, which has been set up as a COVID-19 vaccination center, in Vienna, Austria, on Feb. 7, 2021. (Lisi Niesner/Reuters)
Vaccines & Safety

Counterfeit versions of Pfizer’s COVID-19 vaccine have been identified in Mexico and Poland, the pharmaceutical maker has confirmed to The Epoch Times.

“We are cognizant that in this type of environment—fueled by the ease and convenience of e-commerce and anonymity afforded by the Internet—there will be an increase in the prevalence of fraud, counterfeit, and other illicit activity as it relates to vaccines and treatments for COVID-19,” a spokesperson said in an emailed statement.

The spokesperson added that Pfizer has “extensive experience in criminal risk mitigation” and is working with partner BioNTech to “help reduce the risk of illicit COVID-19 vaccine activity.”

“Our designated team of ex-law enforcement and forensic science specialists are tracking trends very carefully and have processes in place to identify threats to the legitimate supply chain. We continue to work with governments, law enforcement, health care providers, and others to combat this illegal trade,” the spokesperson said, adding that patients should only get vaccinated at official vaccination centers and never try to buy them online.

Officials with the U.S. Justice Department’s International Computer Hacking and Intellectual Property division in Latin America and Eastern Europe are aware of the counterfeit Pfizer vaccines in Mexico and Poland, the department told ABC News, adding that officials “are seeking to coordinate with and support local authorities and Pfizer, as needed.”

A Twitter account run by the Polish government to promote COVID-19 inoculations and provide updates on the country’s vaccine drive shared a report about the fake vaccines from The Wall Street Journal, while noting: “All doses distributed via the National Vaccine Program are sourced directly from manufacturers and are authentic. The practice described [in the article] is unlawful and is associated with the acquisition of vaccines from dubious sources. In Poland, we have NOT identified any such inoculations, as noted in the article.”

The WSJ report cited Mexican officials as saying that 80 people at a clinic in Mexico were injected with a fake vaccine, while citing Polish officials as saying that no one in Poland had received a counterfeit shot. The report also cited sources that said the vaccine in Mexico had fraudulent labels, while a substance inside vials in Poland was probably an anti-wrinkle treatment.

Poland’s minister of health, Adam Niedzielski, responded at a press conference in Warsaw on April 21 to questions about reports that counterfeit vaccines may have made it into the official distribution pipeline.

“The risk of fakes making it into our official distribution is practically non-existent,” Niedzielski said. “All certified products end up at vaccine administration sites and the entire logistical chain is designed to ensure safety and prevent any fake vaccines from official distribution.”

Polish news outlet Polsat News reported that its reporters had managed to buy a fake Pfizer vaccine during a sting operation in January, with the man who sold the vial subsequently arrested by police.

Lev Kubiak, Pfizer’s head of global security, told WSJ that the global demand for the vaccine and a shortfall in supply had led to the scam.

“We have a very limited supply, a supply that will increase as we ramp up and other companies enter the vaccine space. In the interim, there is a perfect opportunity for criminals,” he told the outlet.

The World Health Organization had warned in March of “falsified” Pfizer vaccines found in Mexico and warned that the shots “may still be in circulation in the region.” The health agency added that the fake vaccines were supplied and administered to patients outside authorized vaccination programs.