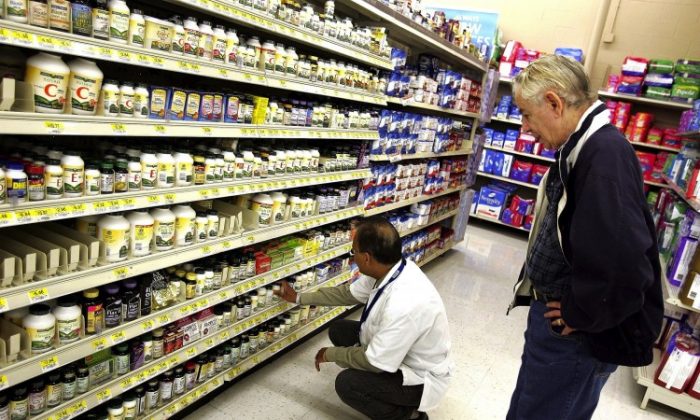 The Alabama Supreme Court ruled that brand name drug companies are liable for generic brand companies. Pfizer, various Alabama businesses, and governmental organizations are asking for a different ruling in their favor. (Tim Boyle/Getty Images)
US

The Alabama Supreme Court ruled that brand-name drug companies should take some heat for harm caused by a generic equivalent, but drug maker Pfizer Inc. and others insist that the ruling goes too far and are urging the court to reconsider.

After taking a generic version of the drug Reglan (metoclopramide) for his acid reflux, Danny Weeks developed tardive dyskinesia—a serious movement disorder associated with the drug. Weeks sued the generic manufacturers, Teva Pharmaceutical Industries LTD and Actavis Elizabeth LLC, as well as the drug’s original developer, Wyeth (a subsidiary or Pfizer), for not warning about Reglan’s long-term risks.

Alabama justices ruled 8–1 that under state law, “a brand-name drug company may be held liable for fraud or misrepresentation (by misstatement or omission), based on statements it made in connection with the manufacture of a brand-name prescription drug, by a plaintiff claiming physical injury caused by a generic drug manufactured by a different company,” according to a legal updatefrom international law firm Faegre Baker Daniels LLP.

The issue of drug innovator liability has gone before the courts 66 times, and the majority of cases involved Reglan. But in nearly all cases—except in California and Vermont—judges found that a drug developer could not be held responsible for how a generic company labeled its product.

Pfizer, the Business Council of Alabama, the Alabama Policy Institute, Pharmaceutical Research and Manufacturers of America (PhRMA), the U.S. Chamber of Commerce, the Product Liability Advisory Council, and the Alabama Defense Lawyers Association appealed to the court in February, stating that the court’s ruling sets a dangerous and decidedly unpopular precedent—not just for brand-name drug companies but for all businesses and inventors.

“Left intact, this expansive and extreme theory of liability would create a disincentive to innovate for companies doing business in Alabama,” he said.

Other critics of the ruling, including dissenting Alabama Supreme Court Associate Justice Glenn Murdock, contend that the majority opinion will stifle innovation and reduce the number of new drugs developed in the United States.

It could take months before the Alabama Supreme Court weighs in on the concerns. Meanwhile, Pfizer and others worry that the case might encourage other courts to rule in favor of innovator liability.

With additional reporting by Conan Milner.