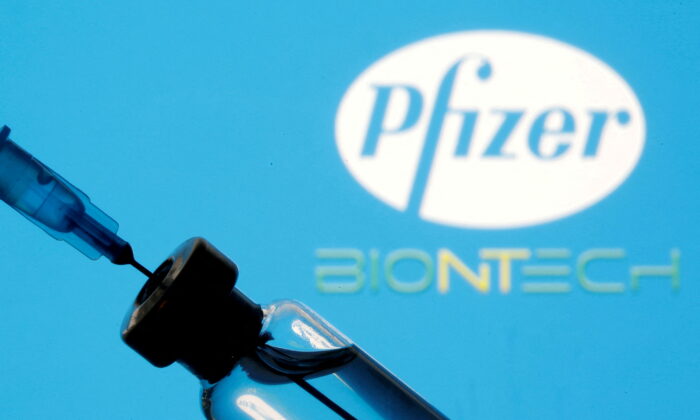 A vial and sryinge are seen in front of a displayed Pfizer and Biontech logo in this file illustration photograph. (Dado Ruvic/Reuters)
Companies

Pfizer and its German partner on Tuesday announced they will work together on a shingles vaccine that utilizes messenger RNA technology.

Pfizer and BioNTech created one of the most-used COVID-19 vaccines in the world by using the technology, which had never been cleared for use in any countries before the pandemic.

Under a new agreement, Pfizer’s antigen and BioNTech’s mRNA platform will be combined while the companies will share development costs. Pfizer will pay BioNTech $225 million, while BioNTech will pay Pfizer $25 million.

Pfizer will have rights to sell the vaccine globally while BioNTech will be able to market it in Germany, Turkey, and certain developing countries.

Clinical trials are planned to start in the second half of this year.

“Pfizer and BioNTech co-developed the world’s first mRNA vaccine, providing a well-tolerated and effective tool to help address COVID-19—the most devastating pandemic in a century—and demonstrating consistent, agile, and high-quality manufacturing on an unprecedented scale,” Dr. Mikael Dolsten, Pfizer’s chief scientific officer, said in a statement. “With this agreement, we continue on our journey of discovery together, by advancing mRNA technology to tackle another health challenge ripe for scientific innovation, supported by our world-class manufacturing network.”

Dr. Ugur Sahin, BioNTech’s CEO and co-founder, said the collaboration would “leverag[e] the expertise and resources of both companies.”

Shingles is a form of the same virus that causes chickenpox; it appears in some people who got chickenpox.

About one in three adults in the United States will develop shingles during their lifetime, according to the Centers for Disease Control and Prevention, with the risk of getting it increasing as people get older.

A rash develops, usually in a single stripe on the body, and other symptoms can include fever, chills, and headache. The rash usually clears up by itself within two to four weeks.

The current recommended shingles vaccine, Shingrix, was approved by the Food and Drug Administration in all adults 18 and older last year. It had been available for adults 50 or older since 2017.

Shingrix, made by GlaxoSmithKline, is administered across two doses, the second of which is recommended two to six months after the first.

Even people who had shingles are advised to get Shingrix because there is a risk of reinfection.

GlaxoSmithKline reported making about $2.7 billion from Shingrix in 2020.