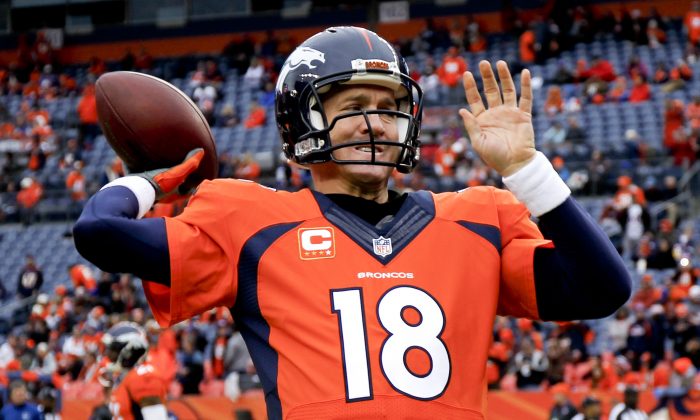 Peyton Manning, the legendary quarterback, is set to play his former team the Indianapolis Colts on Sunday in the NFL playoffs.

Manning, 38, receives a lot of support from his family, including his wife Ashley Thompson.

Peyton and Ashley, 40, were married in 2001, while he was playing for the Colts. They were introduced by her parents’ next-door neighbor the summer before Peyton started college.

The couple have two children—twins. Mosley, a girl, and Marshall, a boy, were born in 2011.

Ashley and Peyton have chosen to keep the twins out of the spotlight, though they have made occasional public appearances. The kids playing around with their dad on the field after a practice was circulated widely since the twins aren’t often seen.

But Peyton has emphasized how much his children and wife mean to him.

“My entire family keeps me positive and they always support me,” he told People magazine while preparing for last season’s Super Bowl.

“They will be coming to town to be with me. Without them, I would not be where I am today. I am very grateful.”

“My kids provide me a lot of joy and happiness everyday. I’m learning more about them everyday. It makes me happy and excited,” he added.

Here’s something you don’t see everyday. Peyton Manning and his kids via @MileHighReport pic.twitter.com/7Kyt3ty55g

Manning’s wife is actually credited for her husband not retiring. He was contemplating doing so after several neck procedures, but she told him “You’ve to to try, you’ve got to try,” according to MMBQ reporter Peter King.

Ashley stays mostly out of her husband’s way, and along with being a mother has a lot of her own projects going on.

“The way I really help Peyton is that I don’t demand a lot of his time,” she said in a previous interview. “He’s willing to give it, but I’m not the type of person that is nagging on him. I think that helps him. He’s able to do what he needs to do and I’m very independent. I do a lot of my own things.”

Thompson graduated from the University of Virginia with a degree in finance and marketing, and is involved with real estate development and marketing residential property.

She and Peyton have received some accolades also for being charitable with their time and money. Peyton started the Peyback Foundation with his wife’s help. The foundation focuses on helping disadvantaged children in Louisiana, Tennessee, and Indiana. The couple also regularly participate with other charities.

She said in the previous interview that her mother Marsha helped instill a giving heart in her at a young age.

“Both my parents made it a point to involve us,” Manning says. “They taught by example.”

She recalled visiting one particular disadvantaged family as a child. “My dad took us,” she says. “I think he had given them a car. We would play together and we were so much like those children, but then I would come home to my house where I had everything I needed. My life was so different. It really made an impact on me.”

Both Peyton and Ashley like to donate money but also donate time, seeing the difference in the two.

“We can give them financial support, but I also think we can give the kids confidence and help teach them to make the right decisions in their lives,” she explained. “A lot of these kids don’t have a consistent adult in their lives. Definitely Peyton is a role model, and it is neat for me to be a role model for the girls in the group.”

Another interesting aspect of Peyton’s wife is her minority stake in the NBA’s Memphis Grizzlies.

Turns out she wanted to make sure the Grizzlies stayed in her hometown, so she became part of a group that purchased the team several years ago.

“I am very excited to make the commitment to join the potential new ownership group of the Memphis Grizzlies,” she said in a statement. “As a native of Memphis, it was important to me that the Grizzlies remain in Tennessee and continue to have a positive impact on the community.”