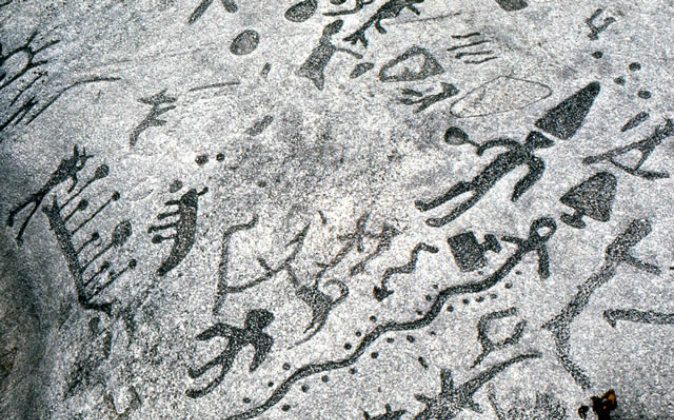 Hundreds of petroglyphs are etched on a slab of crystalline limestone about 180-by-100 feet (a third the size of a football field) in Peterborough, Canada. They may have been left by Algonquin Native Americans about a thousand years ago, or by Scandinavian traders a few thousand years ago. The latter claim flouts the common understanding of history, which places Europeans in the New World much later. But it has had a few prominent supporters.

They say that the depictions of animals, solar symbols, geometric shapes, boats, and human figures on the so-called Peterborough Stone reflect a style used in the Old World.

A large ship was drawn in a style common in Scandinavia.

For example, a large ship was drawn in a style common in Scandinavia, according to Boston University Professor Robert Schoch, a Yale-educated geologist. Schoch’s opinions on the Peterborough Stone were recorded by journalist Charles Giuliani in his article, “An Alternative View of the Distant Past.”

The ship features a large steering oar at the stern, which is only included in ships more than 100 feet long. The local Native population is not known to have produced any such vessels. Some argue that the Natives envisioned it as a spirit ship, that it was not meant to depict their own vessels.

Kelley compared the Peterborough petroglyphs to glyphs in Europe and North Africa. He found that proto-Tifinagh was used in Bronze Age Scandinavia, further south in Italy, and in North Africa.

Proto-Tifinagh gave the unlettered Norse the ability not only to record their own language but to produce records intelligible to their Mediterranean trading partners.
— Dr. Robert Schoch, Boston University

Fell controversially claimed in his 1982 book, “Bronze Age America,” that the Peterborough Stone symbols were meaningfully grouped together to document the commercial enterprise of a Bronze Age Nordic king, Woden-lithi. Fell’s translation of part of the inscriptions reads: “Woden-lithi, of Ringerike the great king, instructed that runes be engraved. A ship he took. In-honor-of-Gungnir was its name …. For ingot-copper of excellent quality came the king by way of trial.”

While Kelley didn’t agree with Fell’s exact translation, he did agree that the script was likely left by Scandinavian traders. Fell estimated the date of the petroglyphs to be about 1700 B.C. Kelley’s estimate was 800 B.C. While many academics scoffed at Fell’s claims, Kelley’s reputation was more secure, since he had earned fame for his decipherment of Mayan glyphs.

Kelley hypothesized that a single trade route ran from the Niger River to Scandinavia, and that the Scandinavians linked that route to Canada.

Schoch elaborated on why the Scandinavians may have used the Berber North African script of proto-Tifinagh: “Many of these peoples were accomplished navigators and traders, as were the Norse. Trade no doubt brought Berbers and Norse together, and in the course of that contact they learned something of each other’s languages.

“But the Norsemen didn’t have a written language. Proto-Tifinagh gave the unlettered Norse the ability not only to record their own language but to produce records intelligible to their Mediterranean trading partners. The Norse took the alphabet to their fjords and then over the Atlantic to the New World … In its time and way, Old Norse in Proto-Tifinagh is no stranger than modern Yiddish, a German dialect written in the Hebrew alphabet, or Maltese, the only Arabic tongue written in the Latin alphabet.”

The Peterborough petroglyph site is known to local Natives as the Teaching Rocks. Their legend hold that it is an entrance to the Spirit world, a place to communicate with spirits.

Giuliani quoted freelance science journalist Patrick Huyghe: “Fell [was] well aware that many of the inscriptions at the [Peterborough] site are the work of later Algonquin artists attempting to imitate what the Scandinavians had originally cut into the limestone. But the central Sungod and Moon goddess figures and certain astronomical signs are clearly not Algonquin.”