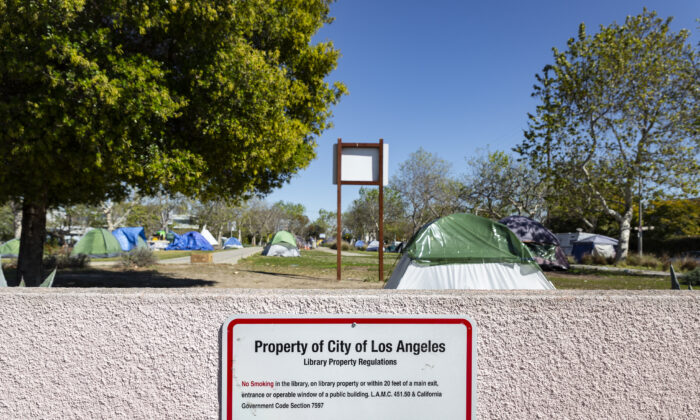 Petition to Ban Encampments in Los Angeles Approved for Circulation

LOS ANGELES—A ban on homeless encampments is a step closer to reality, after the Los Angeles City Clerk on March 3 approved a petition on the matter led by City Councilmember Joe Buscaino.

The “Safer Streets LA” measure—which also aims to increase temporary housing in the city—can now be circulated for signatures until July.

Buscaino and “Safer Streets LA” organizers need about 65,000 signatures to request the city council pass the measure in an ordinance. If the council does not adopt the measure, it will appear on the ballot in the upcoming November 2022 city elections.

Buscaino’s effort would kick in only after people have been offered shelter and refused it.

If ultimately approved, the measure would give the mayor the power to declare a local homelessness emergency that would also allow the city to cut-through red tape to build more shelters.

“Creating enough transitional housing will be the fastest way toward helping those who need it most and returning order to our neighborhoods across Los Angeles,” Buscaino said in a statement.

Buscaino’s measure also aims at withholding the salaries of public officials—specifically the mayor, city attorney and councilmembers—if they show no progress on the issue after 18 months.

The petition comes after the LA City Council rejected Buscaino’s motion to vote to place the issue directly on the June 2022 ballot.

A spokesperson for the “Safer Streets LA” campaign did not respond to a request for comment by press deadline.